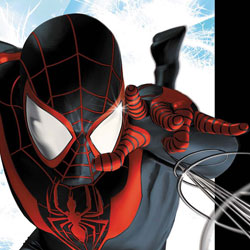 Miles Morales shook the comic book world a few weeks ago when it was announced he was going to be the new Ultimate Spider-Man. The first issue has arrived on stands, and we get our first look at the new kid on the block. Previously in Ultimate (Comics) Spider-Man: Peter Parker was just an ordinary kid with above average intelligence who got bit by a spider, and thus became the web-slinging, all-crawling Hero for the Common Man – SPIDER-MAN!

Have you seen the documentary called Waiting for Superman? Brian Michael Bendis seems to, and he wants to make sure you know about the struggle families have while trying to get their kids into charter schools via lottery. While the documentary is engaging and does bring out the emotion, what Bendis does in the few pages devoted to Miles Morales getting into Brooklyn Visions Academy is intense. While you know the eventual outcome (he gets in), that hold your breath moment is drawn out to the point the reader will celebrate the grand announcement.

Of course the bigger problem for the Morales family isn’t Miles getting into a quality school, but the possibility that they may not be able to afford it in the long term. Again, the way Bendis delivers this information isn’t the smack in your face exposition you’ll see in some books, it’s more underhanded than that. When young Miles visits his uncle to share the news, readers learn all is not well between Uncle Aaron and Miles’ father. Uncle Aaron is more than happy to lend a few dollars should the need arise, but the reason good ol’ dad doesn’t want anything to do with his brother is because Uncle Aaron is a thief, and likes to bring his work home with him.

One of the places Uncle Aaron recently burgled was one of Norman Osborn’s abandoned labs where the super solider spider research was going on. While lifting a valuable bauble, one of the escaped spiders makes its way into Aaron’s bag, and when Miles arrives at his apartment to share the good news, the spider crawls out and bites the boy on the hand.

If Norman Osborn knew that a spider bit Peter Parker and turned him into Spider-Man, why did he inject himself with the Oz formula instead of letting a spider bite him, too? Norman doesn’t seem to be that smart after all…

Like the last kid who got to play Spider-Man for real, Miles also passes out, which freaks out the uncle, who in turn calls the father, who shows up, and the two brothers shout it out. It’s a verbally loud exchange and causes Miles to flee. When daddy goes after him, he walks right by Miles hiding in the shadows of the stoop. Miles wonders why dad didn’t see him until he realizes that when he is in the shadows, he’s invisible. NEW SPIDER-MAN POWERS ACTIVATE!

The art in this book is incredible. Sara Pichelli does a masterful job in staging the action and drawing out the moments with panels that simply draw you in. I read this issue day and date on the iPad, and though I tend to avoid guided view like the plague, the multiple double issue spreads forced me into G.V. mode. The experience reading this issue in guided view heightens the tension and drama Bendis serves up, but it also highlights how great Pichelli’s art is because you’re able to really zoom in on a single panel.

And even better than Pichelli’s pencil work, is the coloring by Justin Ponsor. I love how he combines traditional coloring techniques with old school Zip-A-Tone/screentone patterns used in the backgrounds and in the highlight areas of the panel. It’s different and refreshing and brings an extra bit of energy to the page.

Ultimate Comics Spider-Man #1 is yet another number one you should pick up this week. The art is brilliant, and Bendis does a fine job of once again combing the appropriate amount of schmaltz and interesting character dialogue to create characters that seem alive on the page. This seems fresh, this seems new, and… I liked it! Ultimate Spider-Man #1 is a great read, and earns 4.5 out of 5 Stars.