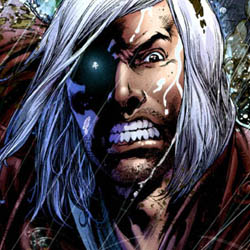 We often hear about concepts that are “ahead of their time,” like the original run of The Prisoner, or Hendrix guitar riffs at Monterrey Pop.  The DC New 52 relaunch has apparently made a cottage industry out of these type of characters (Hawk & Dove, O.M.A.C., Static Shock and others) but this time, they’ve really nailed the one character in their history that MOST DESERVED a second shot.  The original run of Resurrection Man feels like a comic from 2004 rather than 1990-whichever, and I for one am glad to see it back on the stands.  What’s going on in the life of the man who won’t die? Previously, on Resurrection Man:  Mitch Shelley was a hard-luck Louie, a lawyer who found himself the unwilling lab rate of a group of super-scientists who inject him with something called “Tektites” (invented by Wesley Crusher in season one of Star Trek: The Next Generation), which rebuild his body every time he recieved traumatic injury, usually with a new super-ability (often related to the mode of death.)  Chased by the agents of “The Lab,” including a pair of stripperific mercenearies known as the Body Doubles, Mitch Shelley must let the world go on thinking that he, too, is dead, until he can find a way to control the raging spirit that dwells within him.  No, wait, that’s David Banner.  Mitch Shelly has found a new calling with each new body, and now he’s about to embark on the latest leg of his endless journey.

If you’ve read a Marvel comic in the last decade or so, especially one that involves a space hero, you’re probably familiar with Dan Abnett & Andy Lanning, aka DnA.  Well, back in the post-Zero Hour day, they created the Resurrection Man as a reg’lar feller who kept coming back from the dead with super-powers.  It’s a simple concept, and they hit the ground running in this issue, opening in a morgue with Mitch Shelley narrating his umpteenth return:  “Everything tastes of metal…  Except the UNIMAGINABLE pain of coming back to life.”  The basics of what you need to know about Mitch are easily laid out, as he steals clothes from the hospital locker room (even reminding himself that insurance will replace the poor guy’s credit cards to assuage his guilty) and sets off on a new quest.  Each time he comes back, he has different powers (magnetic abilities, this time) and an urge to go to a certain place.  Boarding a plane for for Portland, Mitch muses about the cycle of his life, and the writers SHOW us what kind of character he is through his actions.

Another carry-over from the previous R.M. series comes in the form of his recurring antagonists, Bonny and Carmen, the Body Doubles, a pair of supremely confident and capable mercenaries with a perfect disguise mechanism:  They dress and act like bubble-headed bimbos.  In lesser hands, this could come off as offensive, but here it’s more disturbing as the ladies interrogate, torture and then murder a man trying to track down what happened to Mitch Shelley’s body.  It’s really chilling to see Carmen (dressed in a plaid schoolgirl skirt and tie combo) come up with her plan:  “Let’s find another one, ask the same questions.  But THIS TIME, let’s not GAG him!”  While the Doubles seek Shelley on the ground, he finds that other people are searching for him in the air, as a strange woman on the plane proves to be MUCH more than he bargained for.  There is a spectacular mid-air battle, a crash, and our hero is chopped to bits in a plane engine.  (He gets better.)  The issue ends with the ominous feeling that more than just HUMAN forces are seeking the Resurrection Man, and there’s a cameo by someone I think might just be Madame Xanadu…

I really liked the pacing of this particular issue, and how personal it feels, as Mitch’s perspective is the one that we start the issue with.  The necessary exposition of the first-issue relaunch is very well-handled here, and the art reminds me just enough of the character’s co-creator Jackson Guice to keep it tied to the old series, but is fresh enough to fit in the 2011 batch of creators.  The Body Doubles are pretty girls, but clearly menacing in their actions, while Mitch’s gruesome death is shown in a clever and even discreet manner.  Overall, the only real weakness in the book is that there’s not a whole lot of explanation going on, and even that is probably only going to be a hindrance to those who need everything spelled out for them upfront.  Having read all 27 issues of Volume 1, I have to say that this book will appeal to anyone who knows the character from the 90’s, but should appeal to fans of the old Incredible Hulk series, or The Fugitive.  Resurrection Man #1 rises from the great beyond in high style, earning 4.5 out of 5 stars overall, and I believe it SHOULD be one of the surprise hits of the relaunch.  If you’ve never read any R.M., this one comes recommended.

Faithful Spoilerite Question Of The Day:  Which relaunch title so far has done the best job of showing us what has come before without undermining the new-and-different aspect of the relaunch?