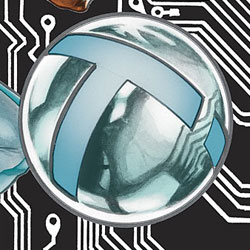 They call him MISTER Terrific…

I’ll admit it, I was never a really big fan of Mister Terrific. Sure he is smart and can probably punch the bad guy in the face real good, but his identity can’t be too secret, ‘cause he has a giant painted T on this face, which probably explains why he is only the third smartest guy on the planet. THANKS BLACK GUY, FOR SAVING US…

If you are going to relaunch a universe, you’re going to need to spend some time making sure the histories and backstories of the characters are in place. This is one of those issues. After defeating Miles Dalton and his giant mechanical suit from wrecking havoc on the streets of London, Mister Terrific decides to pull a Kevin Arnold and tell us how he went from the third smartest man in the world to Mister Terrific, the guy with the floaty ball things.

Readers learn that Michael Holt had everything, a billion dollar company, an Olympic medal, degrees from all the highfalutin universities, and even a wife whom he loved. Too bad she died. The set up and murder of Holt’s wife is done so quickly (one page) that we hardly get a chance to experience any connection between the two. Eric Wallace expects us to take Holt’s word for it, and because this is a first issue, we as readers, are expected to go along for the ride, which means Michael becomes so distraught that he is willing to kill himself by turning his latest experiment on himself. And that’s the moment that changes his life… forever!

Of course it looks like Michael was able to get over his loss, as in the present day it appears as though Holt and a certain Karen Starr (of Starrware Industries) like to partake in some afternoon delight. Boom-chicka-wow-wow indeed.
In order to move the story forward and show the reader how Michael is doing all the amazing things he does today, we’re introduced to the issue’s bad guy, which forces Mister Terrific to show off his laboratory located in the Ninth Dimension, and his fantastic silver balls, which are apparently called T-Spheres, but I think you’d really impress those around you if you changed your battle cry to “Behold my giant silver balls!” Just a suggestion…

But we don’t get to see Mister Terrific get to do much on the terrific side, as the mysterious force that triggered this issue’s killer also appears to have affected Michael Holt, and the sudden rush of insight has turned hero in to potential killer, as Holt decides it best to kill a Senator who is running for President. It’s interesting that the present day story starts out with a lot of people not knowing who Mister Terrific is, and thus the “Thanks black guy” comment that appears in the issue. And because few people know about Mister Terrific, it makes it harder for the reader to appreciate the character, too.

I SEE WHAT YOU DID THERE

On the art side, Gianluca Gugliotta’s art isn’t bad. There are a few times when the proportions of the bodies get a little out of whack from panel to panel, and the facial features tend to change ever so slightly that it may be difficult to remember that the person talking isn’t Michael Holt, but the Senator who wants to be President. Save for those few moments (and they are few) there are moments when the issue shines as far as the art goes.

Ever since word got around that Karen Starr was going to be in Mister Terrific, I was wondering how many times we would see references to Power Girl. Fortunately, those moments are kept to a minimum, with the only in your face bit being in how Gugliotta drew Karen’s dress for the party she attends with Michael. Yup, a big peekaboo window just like her costume. While that is a nice nod, what is even more interesting is the Fantastic Four shout-out that appears in the issue. Karen, with short blonde hair, a stunning blue dress, and white gloves, does bare a resemblance to Sue Richards, but it isn’t until one of the party guests and other possible love interest for Michael, says she might as well be invisible that everything comes together, as it is in that panel where we get Karen in her full gown, right in front of the reader. It’s the neat little bit of art and words aligning that I like.

The story is simple in its execution, and has moments that are brilliant, but overall, I’m left with a feeling of, “Huh?” While I’m board for the entire first arc of this series, unless there is something that comes out of left field, I’m having a hard time identifying with the title character. This wasn’t a terrific issue, but it also wasn’t terrible. Mister Terrific #1 earns a middle of the road rating of 2.5 Stars from this reviewer.