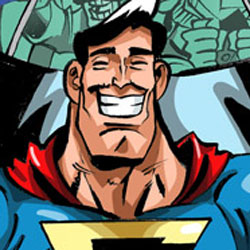 If Family Guy and Justice League Unlimited had a love child, it would be Fleischer, and this November Bluewater Productions presents the first adventure of Generic City’s self-perceived protector. He may mean well, but this fool in a China shop will have to go a long way to convince the hapless population that he’s actually here to help.

In his debut issue in November, Fleischer sort of defends Generic City from  Cyber-Abe (half Terminator, half Dead President) and a little girl with a bad attitude, aided by the ever-drunk Green Latrine with a guest appearance by Frosty the Snowman.

Beginning life as a comic strip on Comicbookmovie.com, Fleischer eventually proved so ridiculous that it was decided he needed to hit the road….which we prefer to interpret as a need for him star in his own comic book. Which has led to Bluewater and the next stage in the blue and red lummox’s career.

“Fleischer is truly the dumbest thing I’ve ever written,” offers co-writer Edward Gross, “and the most rewarding. It started off with my wanting to have some fun with Superman – a lifelong passion of mine – and evolved into a character who is equal parts superhero, Monty Python and just plain stupidity. “

Gross brought the idea to friend and co-writer Leon McKenzie, who initially had no idea what to do with the concept, his writing tending to be darker in nature. “But Ed kept repeating his mantra to embrace my inner moron, and I finally did,” he laughs. “Kind of scary how easily that happened.  But then it all came together and here we are.”

Fleischer truly came to life when artist Fernando Sosa (who was joined by Merbitt)  agreed to illustrate the script. “I accepted without hesitation,” says Sosa. “When I started reading the script, the images came to mind and I could see the whole story as a movie. The script was a lot of fun and in a lot of ways a dream come true for me, because I’ve been influenced by Wally Wood’s Superduperman in MAD magazine and the caricatures of Jack Davis and Wil Eisner. It’s also my way of paying homage to the great comic world and a chance to bring back the humor which I think is lacking today in comics.”

“We have done really well in the past with our action comedy superhero books, like Atlas and Judo Girl.  So bringing this book on was a natural fit for us…and it plain made me laugh out loud”.   said publisher Darren G. Davis

Prepare yourself. Embrace your inner moron. Fleischer is coming!