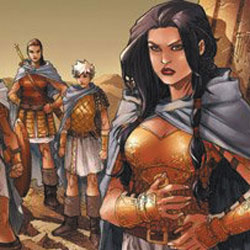 This November, BOOM! Studios presents a harrowing saga of strength, loyalty and bloodshed in the 6th century with 7 WARRIORS, written by Michaël Le Galli with stunning interior art by THE FLASH’s Francis Manapul!

“7 WARRIORS is a brilliant story we’re proud to bring to BOOM! Studios,” says BOOM! Studios Editor-in-Chief Matt Gagnon. “Not only is this Michaël Le Gallie story a sexy, thought-provoking, action epic, but paired with the the high caliber art of Francis Manapul this book is a masterpiece. Be sure to save a spot in your pull list this November for 7 WARRIORS.”

Step into the world of 7 WARRIORS and follow seven beautiful women in 6th century Libya. The capitol of an ancient nation is surrounded by the Persian and Byzantine armies, and only these seven soldiers are chosen to save the heir to the kingdom. Seven Warriors. Seven…sexy, gorgeous women! An exquisitely rendered tale in the vein of 300, written by Michaël Le Galli and drawn by Francis Manapul. 7 WARRIORS #1 hits shelves in November, is written by Michaël Le Galli and features cover and interior art by Francis Manapul. The #1 issue is priced at $3.99 and carries a Diamond code of SEP110849