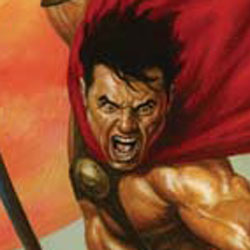 Dynamite Entertainment sent Major Spoilers a sneak peek of titles arriving this week.  Take the jump for a look at The Living Corpse: Exhumed #2, The Green Hornet: Year One #12, Warlord of Mars #9, Sherlock Holmes: Year One #6, and Robert Jordan’s Wheel of Time: Eye of the World #12.

THE LIVING CORPSE: EXHUMED #2  (OF 6)
32 pages FC  • $3.99  •  Teen +
Written by and art by KEN HAESER & BUZ HASSON
Covers by KEN HAESER & TABITHA HAESER (33%), JAY FOTOS (33%),
BUZZ HANSEN & KEN HAESER (33%)
THE LIVING CORPSE’S friend LILITH has been transformed into the thing  that she has always wanted to be—- a blood sucking VAMPIRE! But will it be everything that she’s dreamed of or will she find that the grass is always greener on the other grave? And will THE LIVING CORPSE even let her survive the experience? Also find out what happened that first night that THE LIVING CORPSE came back from the grave and took the job of keeping the dead… dead.

THE GREEN HORNET: YEAR ONE #12
32 pages FC  • $3.99  •  Teen +
Written by MATT WAGNER
Art by AARON CAMPBELL
Covers by MATT WAGNER (main), FRANCESCO FRANCAVILLA (1-in-10)
“Black, White & Green” Retailer incentive cover by MATT WAGNER
Brace yourself for the exciting conclusion of the second story arc of Green Hornet: Year One! Green Hornet finally manages to infiltrate the fortress-like Imperial Hotel and comes face-to-face with the undisputed king of organized crime in Chicago, Vincent “Skid” Caruso.  Alone in a hive of his enemies, how will the Hornet manage to nab Caruso and get out alive?

WARLORD OF MARS #9
32 pages FC  • $3.99  •  Mature
Written by ARVID NELSON
Art by LUI ANTONIO
Covers by JOE JUSKO (50%), LUCIO PARRILLO (50%), STEPHEN SADOWSKI (1-in-15)
“Martian Red” Retailer incentive cover by STEPHEN SADOWSKI
“Black & White” Retailer incentive cover by JOE JUSKO
All the green tribes are united behind John Carter, but will they be in time stop Dejah Thoris’s wedding to the evil Prince of Zodanga? Will John Carter break the siege around Greater Helium, Dejah’s home city? Some, if not all of these questions will be answered in Warlord of Mars #9: From Joy to Death, the climactic installment of Dynamite’s smash, enhanced adaptation of the Edgar Rice Burroughs’ classic, “A Princess of Mars”!

SHERLOCK HOLMES: YEAR ONE #6 (OF 6)
32 pages FC  • $3.99  •  Teen +
Written by SCOTT BEATTY
Art by DANIEL INDRO
Covers by FRANCESCO FRANCAVILLA (50%), AARON CAMPBELL (50%), DANIEL INDRO (1-in-10)
“Black & White” Retailer incentive cover by DANIEL INDRO
Captured by the Twelve Caesars Killer, Holmes, his reluctant partner Dr. John Watson, and the fetching Irene Adler fight to free themselves before the maniacal murderer completes his deadly dozen! But when the madman’s identity is finally revealed, the greater horror may be what the Killer intends to accomplish with his terrible infamy! Will London survive?

ROBERT JORDAN’S WHEEL OF TIME:
EYE OF THE WORLD #12
32 pages FC  • $3.99  •  Teen +
Written by ROBERT JORDAN & CHUCK DIXON
Art and RONILSON FREIRE
Cover by ANDIE TONG
It’s a full day in Baerlon for Rand al’Thor.  First, one of Mat’s tricks with some dangerous men almost get Rand into a fight he can’t walk away from.  Following some sage advice from Gleeman Thom Merrilin and a trip back to the Inn, the boys discover someone from Emond’s Field has found them, and is demanding their return from Lan and Moiraine.  Join us for the latest chapter in the adaptation of Robert Jordan’s WHEEL OF TIME: THE EYE OF THE WORLD!