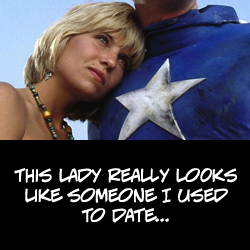 Everyone who loves super-heroes knows this story: Steve Rogers a 28 year old polio-afflicted young man from Redondo Beach, California is brought into the armed forces by Italian defector Dr. Maria Vasselli to become a Super Soldier. His goal? To defeat the Nazi’s own supersoldier, an Italian mutant known as the Red Skull!

From the Inside In

Sometimes I look at movies based on comics or other nerdy properties and I think to myself “how bizarre this must seem to people not familiar with the source’, well, The 1992 version of Captain America is a rare example where being familiar with the comics will actually make it more confusing.

That said, the movie is plenty confusing on its own. I would describe the plot as meandering at best. We spend a lot of time, A LOT OF TIME, traveling to and from places, it often seems like the movie doesn’t actually want to get there and it’s taking the scenic route. The time jumps don’t help, weirdly enough they slow the movie down even more.

I Got a Better Idea

So what is good about this movie? A few things, I like the (wholly unnecessary) arc about how this kid sees Captain America tied to a rocket and decides to be awesome, eventually becoming president. I like Sharon Carter running around Italy, investigating the Red Skull. Honestly I would have liked to see all the scenes with Captain America edited out and the film repackaged as President Kimball and Sharon Carter Vs. The Italian Frankenstein.

As far as special effects and formal quality… well, let’s just say that the movie clearly didn’t have the budget it wanted, although it makes some valiant attempts, for example: Pre-Frankenstein Red Skull is pretty solid. Not much else there though, although that’s to be expected when the first thing we see is a slate that reads:

THIS FILM HAS BEEN MANUFACTURED USING THE BEST SOURCE MATERIAL AVAILABLE.

Which I assume is more of a “sorry this is low-quality, it’s the best we could do” rather than glowing praise for Marvel Comics group.

All and all the movie is not quite bad enough to come out the other side and be good again. And it’s certainly not good enough to be good. The only way I could really recommend this is if you’re a collector of rarities like this one and you want a DVD version to replace that old VHS with the B. Dalton commercials.

Captain America (1992) gets two stars out of five from me.