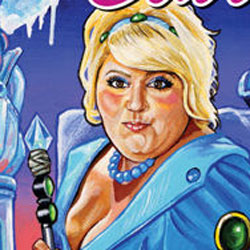 Dark Horse Comics sent Major Spoilers a sneak peek of The Guild: Clara one-shot that arrives in stores on September 14, 2011.

A mother of three, or maybe five, Clara is the Knights of Good’s most irresponsible and hedonistic member. When Clara’s husband overhears her scheduling seventy-eight hours of game time, he hides the computer until she agrees to help him around the house, leading her to uncover a box of mementos from her past. What follows is a bizarre trip down memory lane for Clara.