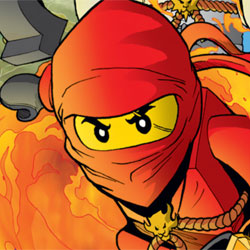 While a lot of attention is paid to the direct market single issue sales, the graphic novel sales in the direct and mass market rarely gets reported.  Papercutz has announced that the Ninjago graphic novel, based on the Ninjago LEGO toy line, is the company’s first title to break 170,000 in pre-orders. Last May, Papercutz, the graphic novel publisher of GERONIMO STILTON, THE SMURFS, BIONICLE®, and DISNEY FAIRIES, announced that its newest series of licensed graphic novels would be based on the red-hot toy line LEGO NINJAGO. Three short months later, Terry Nantier, the publisher of the Papercutz, details that pre-orders for the first LEGO NINJAGO graphic novel, LEGO NINJAGO #1: The Challenge of Samurkai ($6.99) “are the strongest we’ve ever seen.”  So strong in fact, that the pre-orders top 150,000 copies.  This is a record-breaking achievement for Papercutz.

The LEGO NINJAGO graphic novels are written by Greg Farshtey, who penned the BIONICLE graphic novels (based on the LEGO property) To date, Papercutz has sold over 250,000 copies of its BIONICLE line. Paulo Henrique, who has illustrated Papercutz HARDY BOYS graphic novels, will provide the art for the new line.

Introduced in 2011, the NINJAGO toy line is immensely popular and has been a major success in toy stores. The LEGO Group reported a 20% increase in sales in the first quarter of 2011 due to the popularity of the new NINJAGO toy line. A DVD of an animated NINJAGO movie that aired on the Cartoon Network will be released soon and a NINJAGO animated TV series is in the works. NINJAGO blends elements of Asian culture and cosmology with exciting adventure stories.  NINJAGO is the saga of four ninjas who possess the elemental powers of fire, ice, earth, and wind. Mentored by their Master Sensei Wu, they battle the evil skeleton warriors who threaten to take over the NINJAGO universe.