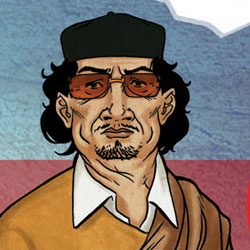 After four decades of the high life in Tripoli, Libyan President Muammar Gaddafi has decided to move on. Well, his nation has gone to war to oust him out of power and world leaders have been cheering his removal. However, he has kept a low profile. Has he decided to move on to greener pastures (or browner sand dunes)?  Bluewater Comics is asking, “Where’s Muammar?”  and fans can read this fun mini-graphic novel exclusively only on the Nook or Kindle to answer the question.

Creator Jarred Weisfeld has called Gaddafi the “modern day Houdini.” “He could show up just about anywhere at any given time,” said Weisfeld.

Darren G. Davis, president of Bluewater Comics, said Bluewater is all about the innovative and creative. “Libya has been in the news in recent months and when Jared came to me with this idea that was so unique and out there, I couldn’t resist,” said Davis.

With art by Dario Reyes, “Where’s Muammar?” shows Bluewater Comics is reaching out beyond the comic book industry and into the world of pop culture and current events.

“We have made headlines for our comic book series on politicians and stars from sports, music, movies and television, we wanted to try something new,” said Davis.