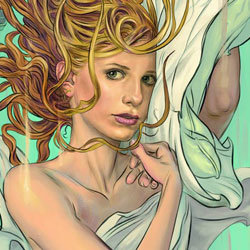 The seed has been destroyed, which means no more magic, and no more slayers. Buffy is it, and though there is still mystical danger in the world, it’s time for everyone to move on. But can they? Previously in Buffy the Vampire Slayer: No more Slayers will be chosen. No more Slayer army. No more gang. Buffy is a waitress, and she’s found an apartment in San Francisco.

The thing about having a big blow out party is someone is going to wake up the next morning feeling the full force of too much happiness (drinking, snogging, hormones, dancing, drinking, and drinking – you get the picture). In the first issue of the new season, that person is Buffy. She can’t remember what happened the previous night at her house warming party, but thanks to a series of flashbacks, we get to see her interact with Xander, Willow, Spike, Riley, her new roommates, and go from happy Buffy, to too many drinks Buffy. There is a sense of happiness during the party scenes, but a big sense of regret and “what have I done” during the aftermath.

The big interactions revolve around the fact that Buffy destroyed the seed, and now everyone is trying to cope. Willow seems adrift without magic, Riley now works hunting down terrorists, Spike claims something bad is going to happen to Buffy for destroying magic, and Xander seems weirdly out of place in the world, even though he and Dawn are living together.

And then there is a monster menace that creeps its way through the issue, only to lead the reader to one of the strangest payoff I’ve seen in a while. Hidden in the true horror is a swerve that works and should bring a chuckle.

With Joss Whedon scripting this issue, there is plenty of Buffy-centric dialogue and humor to keep long time fans entertained. The flashbacks work, but when intercut between present time, and the monster of the week bits, everything seems a bit jumpy. Unfortunately, if you didn’t make your way through Season Eight, then I have a feeling you are going to be really lost, as there is a great deal of referencing to previous events.

Georges Jeanty has done a great job in bringing the world of Buffy the Vampire Slayer to life, but for some reason, I found it difficult to immediately place each character in this issue. Hair styles and facial features change just enough to throw one at first glance, and the character likenesses aren’t consistent from character to character. Buffy kind of looks like Sarah Michelle, but Willow looks nothing like Alyson Hannigan, etc.

Also, more than once, the composition and staging of the characters in the scene just seemed off – almost like the draft the artist used had more dialogue that then didn’t appear in the final issue.

Face it – if you are a Buffy fan, you’re probably going to pick this issue up regardless of what any review has to say. And I agree, this issue should be picked up if only to see what happens “after.” There are several moments that work on the humor level, some character growth that happens with time, and the beginnings of this season’s Big Bad. The issue has a few places that stumble, but overall this is a good read. Buffy the Vampire Slayer Season 9 #1 earns 3.5 out of 5 Stars.