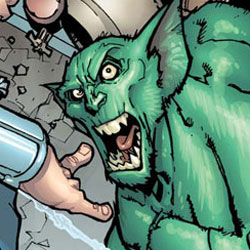 When everyone has spider-powers, then those with spider-powers are not special anymore. Or are they? How is Peter Parker going to deal with millions of citizens who have the same amazing powers of the spider? He’s got to survive getting beat up by the Avengers, The Future Foundation, Iron Fist, and others first. Previously in The Amazing Spider-Man: Everyone – or nearly everyone – in New York City has suddenly woken up with spider-powers. When a bunch of nogoodniks dress up as Spider-Man and take to the streets, chaos erupts, and the Amazing Spider-Man can’t do anything to help… ‘cause all the other heroes thinks he’s a bad guy too, and give him a bit of a beat down.

As the villains continue to do battle with the rest of the heroes of the Marvel Universe, Peter Parker is essentially benched from the fight. He’s pretty bummed about it, because of that whole secret identity thing, but it takes the actions of his police officer girlfriend to show you don’t need a mask to fight crime in this brand new world of wall-crawlers. When Peter does get into the fray, his rallying speech is a great one, and makes you remember why readers want to root for Spider-Man.

Dan Slott does a great job of taking Peter Parker and putting him in his place this issue. Not once, not twice, but three times in this issue, secondary characters share the needed information that gets Spider-Man from point A to point B. The fact that Carlie puts two and two together and figures out The Jackel is behind all the genetic manipulation is a great defining moment for her character, and shows Peter (and readers) that she is a strong and smart addition in Spider-Man’s life.

Slott continues to bring as many Spider-Man characters to the story as he can, and even though I didn’t read this series before the Big Time arc, it is interesting to see Venom (Flash Thompson) AND Anti-Venom (Eddie Brock) enter the fight to try and bring about their own method of order.

Humberto Ramos is one of my all time favorite artists, and this issue shows why Marvel needs to keep him on board for as long as possible. Ramos’ style is best suited for this genre and this group of character in particular. When thousands of people can suddenly swing through the city, Ramos’ extreme poses and ability to stretch the body while still keeping everything from getting too wonky is impressive. There’s also the fact that Ramos’ female characters are always attractive, and if you pay attention to the last panel of the issue, you’re sure to go, “Wait a minute, did he just…? Yes, he did!” It’s all great.

I’m glad I finally got around to picking up The Amazing Spider-Man on a regular basis. When Marvel had the rotating writers a few years ago, I last about a month. With Dan Slott behind the wheel, I’m on board for the long haul. I didn’t think the Spider Island story would amount to much, but even in this second installment, I like how he’s dealing with this crazy plot device. Add wonderful Humberto Ramos art with colors by Edgar Delgado to tie it all together, and The Amazing Spider-Man earns 4.5 out of 5 Stars.