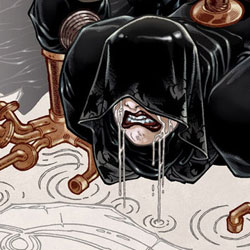 Things are always darkest before the dawn, and for the Locke kids, things are looking pretty dark right now. IDW Publishing’s Locke & Key: Clockworks #2 arrived this week and the dark corners of the Major Spoilers HQ are just a bit scarier now. Previously in Locke & Key: Dodge creeped us out when he switched bodies with Bode, in a last ditch effort to find the Omega Key. The Omega Key unlocks a door deep beneath the grounds of Keyhouse and is a doorway to another dimension, a place where great evil wants to make its way into the world.

Bode (aka Dodge) is causing nothing but problems, and each time someone gets in his way, he’s more than willing to kill that person – even if it is another small child. Worse, he’s released Kinsey’s fear and tears she’s kept bottled up, and the two have made their way into Tyler’s head, and once those two ugly little creatures have their fun, Tyler is a walking time bomb.

This is an intense issue. While the last issue gave us a look at how the keys came to be, and told us what the Omega Key would unlock, this issue is spooky in much the same way as government officials probably felt in the 1950s – you can’t trust anyone. And just when you think everyone is safe, the villain finally finds what he’s been looking for since the first issue all those years ago. Because the creep factor is so high, the one glimmer of hope that appears at the end of the issue (and also in the first volume) doesn’t make me feel any better over how this arc is going to end.

Joe Hill once again delivers a story full of misery, mystery, and mayhem that draws the reader in and keeps them in their seat through the entire issue. He’s created a world that is rich and full, and one that I hope doesn’t end in a page or two when the final issue arrives. Such an entertaining read, it’s worth checking out.

In the future if I ever read a Joe Hill book and it doesn’t have art by Gabriel Rodriguez I’m going to have to put the book back on the shelf. Joe Hill and Gabriel Rodriguez are a perfect combination – like peanut butter and jelly, beer and peanuts, or ham and cheese. Rodriguez does not fail to deliver once again this issue, and I am astounded by the amount of detail he is able to cram into each and every panel.

There are two books every single comic book and non-comic book reader needs to check out. Locke & Key is one of them. Unfortunately, this arc is not a good jumping on point, but it is still fantastic on every level. The overall story is coming closer and closer to the end, but the story keeps getting better and better. Locke & Key: Clockworks #2 is certainly worth checking out, and earns 5 out of 5 Stars.