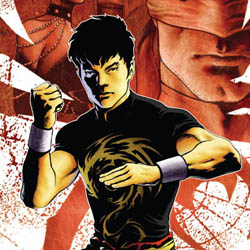 Ever since 1973, Shang-Chi, the son of Fu Manchu, has walked the roads of the Marvel Universe seeking balance and spiritual enrichment.  Now that every single person in Manhattan has gained Spider-Man’s powerset, Shang’s search has been sidetracked a bit by a mystical menace that nobody else can perceive.  Will his fists of fury be enough to track down the big boss behind this game of death, or has he forever lost the way of the dragon in the spider’s web? Previously, on Spider-Island – Deadly Hands Of Kung-Fu:  Shang-Chi, the Master of Kung-Fu is the son of the evil Fu Manchu, raised by assassins as a human weapon, and eventually escaping to find his own path.  His journey has led him through every corner of the Marvel Universe, and Shang has used his superior kung-fu in defense of the innocents, even once facing down the Incredible Hulk himself!  (It was kinda epic.)  Now, he’s one of the millions who have gained the powers of Spider-Man due to an evil scheme of the Jackal, but Shang’s destiny, as always, is about to throw him a curve ball…

Dragon And Tiger Moving As One!

Steve Englehart is a name that few people seem to talk about any longer, but during the Bronze Age and beyond, he was the architect of literally hundreds of iconic tales.

Steve also created Shang-Chi back in ’73, and he(Shang-Chi, not Englehart) has remained one of Marvel’s iconic characters: a thoughtful, scholarly man who is paradoxically the son of one of the worst villains of all-time and a bare-handed combat expert.  Though tied to the 70’s kung-fu explosion, Shang is somehow timeless in his appeal, and this issue immediately latches onto what makes him tick, as the Master of Kung-Fu finds himself plagued by strange dreams.  When he consults with Madam Web (aka Spider-Woman II, aka Julia Carpenter) he is told that he will have to confront a great evil all by himself, and responds without any hubris, “To be without aid is not unusual for me.  I will face this menace alone.”  Shang is thrown into Spider-Island headfirst, using his own newfound spider-abilites (all the while reminding himself not to envy the real Spider-Man) and his chop socky powers all at once.

“They call me Master of Kung-Fu.  But it is a title given to me…  I do not claim it.”  Right there, the writer proves to me that he’s got this one nailed, and I’m kind of taken with the art as well.  There’s a pencilled-in roughness that gives it a lovely charm, reminding me of the old black-and-white Deadly Hands magazine, making the visuals seem somewhat more down-to-earth than your average comic but also spectacularly conveying the beauty of Shang-Chi in motion.  In battle, Shang finds himself shoulder-to-shoulder with his old friend Iron Fist, who is amazed to find that they BOTH have been sharing the dreams of a spidery menace in the shadows.  When Fist’s fellow Living Weapon, The Bride of Nine Spiders, arrives, she and Iron Fist depart the battle, and Shang-Chi stealthily follows.  How do you know when somebody is super-sneaky?  When they can sneak up on Daniel Rand, Faithful Spoilerites.  Shang discovers that the dreams aren’t the only things that are odd in this situation, and we fade to black with Iron Fist and the Master of Kung-Fu left lying where they stood…

The Verdict: Rising And Advancing Of The Marvel U.

As the token old dude at Major Spoilers, I always like to remind folks of the forgotten characters who lurk in the shadows (Ultra The Multi-Alien will get his due, you mark my words!) and Shang-Chi has always been a fave-rave at my house.  This issue gets him exactly right, emphasizing his zen nature without making him boring or too perfect.  When Shang warns a bystander of the danger of trying to fight villains with spider-powers, it’s to emblemize his compassion.  (Of course, that bystander is a young photographer called Peter Parker, but that just makes it even funnier.)  When he leaves the battle to the superheroes in order to make sure that his oldest friend is okay, it emphasizes Shang-Chi’s loyalty.  And when he faces down with a super-powered menace using only his fists and his resolve, it emphasizes his pure AWESOME.  This issue is the kind of story that I love to see out of Marvel, taking a character and placing them in the midst of universal chaos and making it all about the character, a very Astro City take on Shang-Chi.  The idea that there’s a threat that no one else notices because of the chaos of the bigger crossover is one that appeals to me and perfectly fits the Shang-Chi character, leading Spider-Island: Deadly Hands of Kung Fu #1 to earn a fine and well-deserved 4 out of 5 stars overall.  If anyone ever truly embodied the argument of “he doesn’t have any powers” that people like to attribute to Batman, it’s this character.  And Shang’s not even a billionaire bon vivant and playboy…

Faithful Spoilerite Question Of The Day:  Now that Shang-Chi is getting some much-deserved screen time, are there any 70’s characters left that Marvel hasn’t revived?