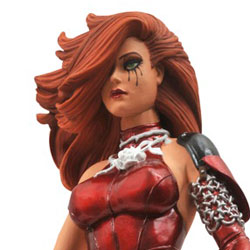 Diamond Select Toys has announced four more statues are joining the Femme Fatales line, and they rolling out, one a month beginning in November.

Executioner Dawn
Why a third statue of Dawn? Because the goddess of birth and rebirth appears differently to everyone who sees her — sometimes she’s an innocent beauty, sometimes a fierce warrior. In the pages of Cry for Dawn, she has been Isis, Kali, Gaia, Mother Earth and more, the guardian of witches and the lover of Death. And as a lover of Death, she is often a dispenser of death, as well. The Executioner Dawn Femme Fatales statue is sculpted by Sam Greenwell, based on a design by Dawn creator Joseph Michael Linsner for the cover of Cry for Dawn #8. (Coming in February 2012) Snow White
Since they were little girls, Snow White and her sister Rose Red have seen things that would shock normal people. But living on the edge of a forest inhabited by talking bears and angry dwarves has made them indifferent to the strange and unusual, and even the most bizarre creatures are usually met with a bemused expression. Snow has even taken to carrying a pair of scissors around, because you never know when you’ll need to liberate someone’s long beard from an old tree trunk. The Snow White Femme Fatales statue is sculpted by Sam Greenwell, based on a design by Art Asylum. (Coming in January 2012)

Medusa
Like her distant cousins the Sirens, the gorgon Medusa is an ensnarer of sailors, only she doesn’t drown her victims — she turns them to stone. That they then sink to the bottom of the sea is none of her concern, only that no man who lives may gaze upon her beauty and tell the tale. Except… one man has seen her, and lived, and he yet walks the earth. Someday Medusa will catch up to him, and no man alive will keep her from correcting her mistake… The Medusa Femme Fatales statue is sculpted by Jean St. Jean, based on a design by Uriel Caton. (Coming in November.) Darkchylde
Ariel Chylde is a girl cursed to become the many creatures from her many recurring nightmares. Every time Ariel transforms, she sheds her skin and a new nightmare emerges from her Id to act out her deepest, darkest impulses. But even though Ariel can host the shape of many evils, she has a heart of gold and must save her small town from the forces of darkness she’s set free. The Darkchylde Femme Fatales statue is sculpted by Sam Greenwell, based on a design by Darkchylde creator Randy Queen. (Coming in December.)