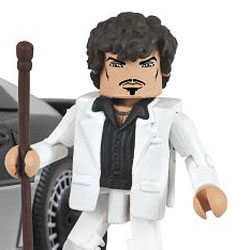 TOYS: KITT and Pirates on the way

This holiday season, be on the lookout for Minimates vehicles for your action figures.

This Christmas, you’re getting a car. Not just any car — the Knight Industries Two Thousand, or “KITT” to his friends! That’s right, our third assortment of Minimates Vehicles will include not only a new Pirate Raiders pirate ship and a Minimates MAX Armored Personnel Carrier, but also KITT himself, star of the Knight Rider TV series in the 1980s along with some guy named Hasselhoff.

The 4-inch-long vehicle will come with a two-inch Michael Knight, with opening doors and room for a passenger, and it will only be available at Toys R Us in late November, along with Robert Deal’s pirate ship (with Undercover Anne Bonny) and a police-colors APC (with driver). But, since KITT needs his nemesis, we’re also releasing the evil KARR with Garthe Knight in that wave’s specialty-store and comic-shop-exclusive assortment, along with a pirated British Navy ship (with officer) and an arctic-colors APC (with driver)! Order all three through your local retailer!

And if that’s not enough? a special-edition version of KITT, featuring his Super Pursuit Mode transformation, will be available a month later, just in time for the new year and only through Diamond Comics Distributors’ Previews catalog. Which means you should tell your local comic book shop to order it in! Don’t get left in the dust!