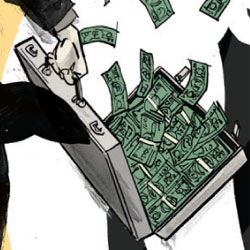 While the world is casting its gaze upon the newly relaunched spandex tight crowd, there are still books being put out that have nothing to do with flying and fighting crime, but everything to do with mystery and danger. TO THE WIKI: MONEY LAUNDERING

Money laundering is disguising illegal sources of money so that it looks like it came from legal sources. The methods by which money may be laundered are varied and can range in sophistication. Many regulatory and governmental authorities quote estimates each year for the amount of money laundered, either worldwide or within their national economy.

WELCOME TO THE WORLD OF THE RINSE

I know little to nothing about money laundering (that I’m admitting to, mind you), so when readers are presented with the character of Jeff Sinclair and his ability to launder money better than anyone else, I’m going to have to go along for the ride as Gary Phillips presents it. In this first issue, readers get to see Jeff go about his business of turning bad money from dope growers in Northern California, into legit cash.

Phillips makes the life of a money launderer sound glamorous, and all seems to be right with the world until Jeff meets Hank Winslow, who used to work for a big casino in Las Vegas. That is until he decided to steal 25 million dollars and run off into the night. Winslow needs to clean the money, and fast, which sounds like a good thing for Jeff as he gets a percentage, but there’s also a catch – the casino owner is in tight with the mob, and already goons are following Winslow and Jeff trying to get the money back. Through in a government spook needing a “favor” and The Rinse has the makings of a great thriller you’d probably see on the silver screen.

And maybe that is what Phillips is headed – turning another comic book property into a big screen property for fun and profit. In this case, I’m not against the idea, as this first issue has a solid working premise, the central character walks the line between hoodlum and hero, and there’s enough of a look at the underside of society that will bring audiences in. I just hope audiences find this book first.

NO CAPES, NO TIGHTS, THIS IS THE “REAL WORLD”

It can take a while for the casual reader to identify the house style from any publisher, and though BOOM! Studios has a number of properties that have different artistic styles due to the property owner, the combination of color and thick ink lines around the characters let readers know instantly that this is a BOOM! Book.

The depictions of the environment and the people that inhabit this world are well done. There is never a time that I’m confused on who is who. Granted, the title character does look a little odd walking around in his Kolchak outfit, but that may be the artist having a little fun with the lead character’s identity.

When all is said and done, anytime I can get a smart book that gives me story that doesn’t involve a building being dropped on someone’s head I’m more than interested. When BOOM! tells stories outside of the superhero genre, they generally do a good job, and they do a great job with titles in the thriller/spy genre. The Rinse is no exception. Though we don’t know the character’s full backstory, The Rinse has enough of a hook to bring me back for the next chapter. And when the book has a one dollar cover price, The Rinse is definitely worth picking up, earning 4 out of 5 Stars.