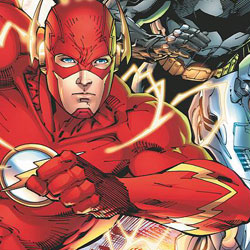 We will bring our Dueling Review coverage of Justice League #1 your way this afternoon when A) we get off work, and B) after we get our butts to the comic book store.  Until then, here’s your chance to talk about Justice League #1.  The midnight release saw long lines at some comic stores, and we learned that it became one of the top download files from the various bittorrent sites an hour after the book went on sale.

Did you get your copy of Justice League #1?  What did you think?  Did Johns and Lee bring the magic, or did the fumble on the one yard line and ruin everything?  Lover or hater? Physical copy or LEGAL digital download? Here’s your chance to share your thoughts on one of the biggest changes to occur in the DC Universe in the last decade.