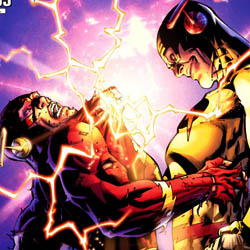 As much as I have not cared for the revamped and relaunched “Ultimate” Barry Allen, I am glad this game-changing miniseries is all about Flash II.  Since he ushered in the original universal change back in ’54, it’s fitting that he be at the forefront as we do it again for a new age.  But how do we get from here to there? Previously, on Flashpoint:  A routine day of police work led to a number of shocking discoveries for CSI Barry Allen:  His long-ago-murdered mother was still alive.  His super-powered alter-ego had never existed.  And the entire world had somehow been reshaped by external forces into a dystopian nightmare, where all his Justice League friends were either gone, unrecognizable, or both.  In a last ditch effort, he managed to recreate the accident that gave him super-speed, and hook up with this world’s Batman, Thomas Wayne (father of our world’s version.)  Together, they found themselves at the center of a war between Wonder Woman and Aquaman that would lead to certain doom for the entire world.  And then Professor Zoom showed up…

It’s always interesting to see where a character hits his breaking point.  In a world gone mad, surrounded by death, having watched a 13 year old boy get gutted last issue, Barry Allen stands face to face with the man who murdered his wife, the man who killed his parents, the man whose obsession led to this moment…  and he loses it.  A super-speed barrage of fists should lead to a Chuck Norris moment, where the hero grits his teeth and spits and says “Now we save th’ world.”  Instead, Reverse-Flash easily deflects Barry’s blows, LAUGHING in his face, and telling him the awful truth:  “You’re the villain today!”  Andy Kubert does a great job rendering the battle sequences, and the utter shock on Barry Allen’s face as he suddenly remembers is particularly effective.  R-Flash gloats some more, taunting Barry about how this all happened, how Barry himself tried to change time, how Barry stopped Reverse-Flash seconds before he would have killed Barry’s mother, and how this ham-fisted attempt to “fix” things led the world to the mess it is today.  Aside form the fact that it’s a pretty amazing revelation (and it is), what makes this sequence fun is Professor Zoom’s utter loathing at how Barry’s time-stream adjustment were amateurish, not like his own artistic work.  Really loving the Reverse-Flash moments here, and this is what Flash: Rebirth SHOULD have been.

Eobard Thawne then opens up a can of lightspeed whupa$$ on his old frenemy, finally able to do whatever he wants to the Flash without damaging his own timeline, because he’s a time paradox now.  He can even KILL Barry in cold blood, and takes a moment to gloat about how much he loves this moment…

…before the Batman stabs him through the heart.  The fighty-fighty continues around them, but Bruce and Barry have another agenda, a more important one:  Save the universe that could have been.  Now, we all know where this is going, but it’s really well-done, and for a three-issue flash-in-the-pan (no pun intended), this alternate Batman is a remarkably strong character.  After a quick visit with mommy (which is sentimental and sweet, but serves mostly to remind me that all the DC characters are absorbing Batman’s origin) Barry leaps into the time-stream, hoping that this leap with be the leap home.  Somehow, though, reality has been splintered, and THREE timelines are there.  A mysterious someone whispers in his ear that he is the key, and Barry is subtly transformed into his new “liney-boots and chinstrap” Jim Lee costume, and awakens at his desk.  The issue ends with Barry finding that he’s back home (sort of) and taking a letter to his old friend Bruce, a letter written by a father who died twenty-odd years ago…

Here’s the great news:  this issue works.  Knowing in advance that we were going to end up with a new universe out of it, I had worried that Flashpoint would devolve into a ‘What If?’ style series of murders and only Barry making it out unscathed.  Instead, we get a couple of interesting moments (Grifter makes an appearance, seemingly setting up his new prominence, while Superman gets a moment in the sun) with the cast of the alternate reality, and a shocking revelation, leading to an intriguing moment that leads into things.  Most of all, we get the quiet and warm ending of two old friends sharing a moment, as a tearful Bruce thanks Barry for bringing him his father’s letter.  In short, it could have gone much worse.  The downsides come in the fact that big swathes of the issue are nothing but fighty-fighty, and certain characters show up, yell their battle cry and then disappear.  The Wonder Woman/Aquaman war gets no resolution here, and Billy Batson is well-and-truly dead, but given that they had a limited number of pages to work with, I think that they delivered a strong issue.

Most of all, I started thinking back to the last few times I’ve finished an issue that was clearly the gateway to a new universe, and how I felt after each one.  After Crisis On Infinite Earths #12, I was hopeful and shocked.  After Zero Hour #0, I was annoyed.  After Infinite Crisis #6, I was confused, hopeful and hungry.  After Final Crisis #6, I had to wait a few hours for the dizziness to subside.  Flashpoint #5 has left me hopeful, intrigued, and wanting to read about this brave, new DCU, which is what a book like this needs to have done, earning 4 out of 5 stars overall.  I like to think I’m pretty savvy as a reader, and I enjoy when I’m actually surprised by the way the plot unfolds.  It’s not a perfect comic book, but it’s a good one.  And now, the new Justice League awaits!

Faithful Spoilerite Question Of The Day:  Will this story be the new DC “Days of Future Past”, or is it destined to be forgotten in the wake of all-new shiny shiny toys?