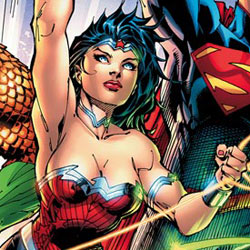 The big event is here! DC is putting a great deal of effort and resource into the relaunch/renumbering of all of its titles. With the end of Flashpoint #5, it’s time to turn our attention to Justice League #1, the place where the New 52 begins. Stephen and Matthew took time to examine the first issue and are ready to share their thoughts. Previously in Justice League: In this universe, the Justice League has never formed. Instead heroes have been operating as individuals, instead of a coherent team…

STEPHEN: So here we are…

MATTHEW: Indeed.  We… are here.

STEPHEN: Should we get to it?

MATTHEW:  I figure the readers would appreciate it… Plus, I have a feeling our Robot Overlord will begin the shock treatments if we don’t.

STEPHEN: Okay… I REALLY LIKED THIS ISSUE! While Geoff Johns may not be my favorite writer, I think he did a fantastic job of introducing the reader to the new DC Universe, and more importantly the tweaked and changed characters that live in that universe. The first meeting between Batman and Green Lantern reminds me a great deal of the All-Star series; you have a hot headed cocksure police officer of the stars, butting heads with someone who is a real dick… an effective crime fighter, but a real dick nonetheless. I really want to see these two not become chummy friends in this series, but instead the antagonistic friends that represent the opposite ends of the team – the hero of the light and the hero of the dark.

MATTHEW: There is a clear parallel between the All-Star versions of Batman and Green Lantern and this issue, and that actually comes across as a weakness for me.  Those “trial balloon” versions of the characters informed this re-imaging, and since I didn’t like the All-Star versions, it’s a little troublesome for me.  Still, I do like the beginning of this issue, and I am much amused by the fact that Green Lantern is gobsmacked by the fact that Bruce Wayne is just a man in a costume in a world full of burgeoning superhumans.  I even like the fact that Batman was so easily able to steal Hal’s power ring, just to show how super-confident (perhaps even cocky) both of them are.  The “Light Vs. Dark” thing was pretty much hammered into place in dialogue AND in the art, though, and it felt a little bit overwhelming to me.

STEPHEN: I wasn’t expecting the villain of the arc to be revealed so soon, but when the Parademon utters “Darkseid”, and GL and Batman don’t know what the heck a Dark Side is, the reader should instantly understand the importance of the team forming. Without a villain of such magnitude, there really is no reason for the Justice League to form. We haven’t seen Darkseid as the central character since that Final Crisis fiasco, and while I don’t think the character was handled correctly then, I’m hopefully Darkseid is going to be revealed as the big bad we all want him to be, and not the watered down night club owner following the Death of The New Gods.

MATTHEW:  I knew Darkseid was coming, as he has slowly become the Justice League’s greatest foe over the past 2 decades or so, and I can actually forgive that.  If you’re going to launch the Big Characters, you need a big villain, and nobody’s bigger than the Lord of Apokalips.  I’m more interested in the reveal of a young Victor Stone, who we all know is going to become Cyborg.  As a college football star, Vic is troubled by his emotionally distant father, who is apparently studying the new superhuman explosion in their world.

STEPHEN: The interesting thing about the Vic story, from my view, is the segment not only gave us a human perspective on a world that has superheroes that no one trusts, but that Vic also gives us a character we can sympathize with. His absentee father, his desire to succeed, and maybe even his desire to be in the same limelight as the heroes, seem to make Vic a very sympathetic, and perhaps unintentional focus character for the series.

MATTHEW:  Oh, I think it’s completely intentional.  He’s the new factor in the JLA, after all.  We know (or think we know) Batman, Green Lantern and the rest, but we’ve never seen Cyborg’s origin in this light.  And I’m quite entertained that the issue ends with an appearance of a certain Big Blue boy scout, and the promise of Superman Vs. Batman in the next issue.

STEPHEN: We haven’t read Action Comics or Superman yet, so I don’t know what his story is, but from the promotional images we’ve seen, he’s constantly being chased. The smack down Kal gives Hal seems very natural and appropriate, even if things are starting to build to the “I don’t know you, let’s fight!” story telling method we’ve seen for years. I don’t mind it really, when a group of testosterone pumped guy get together, there are going to be a pissing match, so I’d rather get this out of the way now rather than later.

MATTHEW:  Indeed.  This whole issue feels very much like a Marvel-style storytelling, in that no one really seems to trust anyone else and they immediately come to blows upon meeting.  Given Jim Lee’s origins in the X-Men franchise, I’d say this, also, is intentional, and if nothing else, the issue looks pretty fabulous.

STEPHEN: Even when I go back and look at Jim Lee’s early work, I still amazed and thrilled at what he brings to the table. So much detail, a great understanding of “camera” placement and layout, I really dig everything on the page. Well I take that back, the one annoying thing I did not like at all in this issue was the constant interruption of the story with all those damn ads in the print copy. On the digital side (yes, I did buy both the print and electronic copies, ‘cause… you know… I have an iPad) ads weren’t an issue.

MATTHEW:  Ads are pretty much the price of admission, these days, although this issue did seem to have more of them than recent DC works.  I only read the print copy, but the biggest distraction for me were the super-glowy digital effects used for Hal’s power ring, as they’re just translucent enough to be confusing as hell, leading to some comprehension problems in the art.

STEPHEN: Bottom line for me… I LIKE IT! Seriously, this was a solid step in the right direction, and I’m board for at least a dozen more issues before I decide to give this series the boot. Great introduction of the characters, great development for Vic, the art is fantastic, and I loved reading the tales of superheroes…and that is saying a lot considering I’ve been rather down on the genre as of late. I’m excited enough about this issue and everything I’ve seen, that I’m giving this 5 out of 5 Stars.

MATTHEW:  I’d love to give it that much, but I’m still a bit tentative.  I like this, as first issues go, but I’m troubled by the ‘Write For The Trade’-iness of having issue one of a team book feature only two of the characters (admittedly with cameos by a couple more) and there is a youthful bull-moose loose-cannon vibe to both Batman and Green Lantern that I find a little bit distasteful, even as it’s entertaining.  I’ll agree that it’s a good start for things, it sets a clear tone for our universe, it gives us a little bit of universe-building, and it is a well-designed issue.  The downsides for me come in the breakneck pacing, a slight uncertainty about the fact that all four of the heroes introduced in this issue are mid-20’s tough-guys who might be played by Josh Hartnett, and a niggling irritation in the back of my head that the costumes look a little TOO much like the product of a single designer.  Yes, certainly it’s good to have a unified style, but 8 characters from different backgrounds who all shop at the same store is a stretch for credibility in my mind.  Still, most of my complaints come from a “This isn’t what I KNOW!” perspective, and that’s a good thing, since they’re shooting for a new audience and a level playing field for all the readers.  Justice League #1 is a strong issue, and certainly not the failure that so many nay-sayers have been decrying, earning 3.5 out of 5 stars overall from Matthew.

ROBOT OVERLORD:  Well, this is interesting, a solid love from meatbag #1, and a tepid look at the heroes from meatbag #2.  There is already plenty of talk of this issue in the Major Spoilers Talk Back: Justice League #1, but you are free to offer your thoughts in the comment section below… you know… if you want to… And I know you want to.