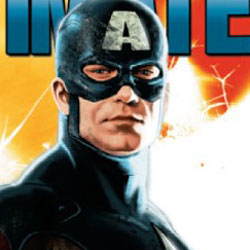 It’s just another day at The Triskelion until Reed Richards and his crazy group of kids create a giant mushroom cloud shaped building in the middle of Germany. CONDITION RED! Previously in The Ultimates: With the death of Spider-Man, it’s time for the Ultimate Universe to restart anew with new adventures of that universe’s Avengers.

JUST A DAY IN THE LIFE

The issue begins with a calm, condition green day, with not a cloud in the sky. Then crazy Reed Richards appears with his Future Foundation Followers and they instantly build a mushroom cloud shaped building in the middle of nowhere. Or at least I think it is crazy Reed Richards, and I think it is Ultimate version of the Future Foundation – you see, you really need to have read the Ultimate Fallout series, and more than likely the previous The Ultimates series to see why Reed went all crazy and such. If these kinds of things don’t bother you, then you’ll be fine, but when Marvel does such a great job with it’s version of Previously in… being dropped into the situation without explanation is irritating to say the least.

Readers then get a look at a typical day at SHIELD headquarters, where Nick Fury surveys all that goes on in the world. Green goes to Condition Red pretty quickly, as Europe’s Excalibur team flies to Asgard to kick some butt over some stolen beer, and the biff-bang-boom starts up in grand manner. We also get to see Tony Stark and his remote controlled Rocketmen attempt to prevent to fleets from going to war over something or other. Neither of these setups is that important as the reveal that the battle fleet of ships is just a decoy to take out Iron Man, and the fight between gods and men is just a way to get the heroes to Reed’s crazy building where Asgardians and Excalibur members alike are snatched and dragged kicking and screaming into the innards of the building.

It’s all rather big and impressive, if it weren’t so gosh darn annoying.

It’s not that Hickman can’t tell a story, as the setup and way the story plays out is well thought out. I think it is partly due to the fact that the world in this universe has just gone through some of the worst stuff it can possibly imagine, and the heroes are caught unawares like they were in their rookie year.

Quite honestly, I don’t like the art in this issue at all. It’s probably the one thing that pushes this issue into fingernail on the chalkboard territory. It isn’t that Esad Rubic can’t draw the human form, it’s that the artist decides the best thing to do is take every panel of the issue and use a different angle – which by itself isn’t a bad thing, but the constant love of extreme Dutch angles to the point that the reader has to turn the book, move it further and closer to his face in order to make out what is going on.

And to make matters worse, the extreme contrast in the way the issue is colored muddies the action to the oint there are times when it is hard to make out what is going on at times.

BOTTOM LINE: CHECK IT FOR THE STORY ONLY

By issues end, I really didn’t care if I read the next installment of The Ultimates or not. The shine has worn off, and the new exciting stories of The Ultimates has given way to a story that has the potential of being extremely cool, but falls flat in continuing to want to draw me in. That, coupled with the art that appears to want to impress the reader with its explosion of Hollywood camera techniques, and The Ultimates #1 earns 2 out of 5 Stars.