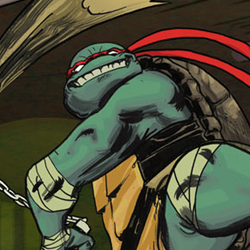 The Heroes in a Half-Shell are back and this updated take on the Ninja Turtles combines a bit of the original series with the cartoon series that brings something new to readers.

Previously in Teenage Mutant Ninja Turtles: Forget everything you knew before. This is all new…

THE BEST OF BOTH WORLDS?

For fans of the Teenage Mutant Ninja Turtles, you probably fall into one of two categories; those that love the Cowabunga Dude, pizza eating comedians of the ‘80s cartoon series, or those that love the black and white gritty comic book from the ‘80s. The good news is this first issue is a mixture of both, so it shouldn’t put too many people off.

Here, readers get a mixture of fighting, backstory, and sorrow over the loss of one of their own. While the turtles do get to mix it up with another gang, something in quartets past has caused Raphael to leave the group to find his own way. And during Raphel’s wanderings, we get to see references to the pizza eating dudes from the cartoon series, which is done very well, and should bring a chuckles to the reader’s face.

We also get to see the introduction of several supporting cast members including April O’Neil and Casey Jones. For Casey’s introduction, it deals with parental abuse, as Raphael breaks up the beating at the conclusion of the issue. April’s is a bit different, and changes the nature of the history of the characters. In this issue, we meet April as a research assistant at a bio-lab. While we don’t know if she is an undercover reporter, or a real scientist, we do get to see her interacting with several of the lab’s animals – namely four turtles and a rat, whom all get their names by the time the flashback moments end.

There is no Shredder in this issue, and we don’t get to see the animals transform into masters of the martial arts, we are introduced to the first villain, Krang, who only appears as a disembodied voice on the phone. I don’t know if this is to hide the fact that he is/might be an alien, or because it is more fun to have a villain similar to SPECTRE or MAD. In either case, I’m not too worried about the big bad, as TMNT has always been more about the character development of the turtles as they find their place in the world over constant fighting.

Those expecting classic Eastman and Laird art are going to be disappointed in this first issue. While the art is fine, and Eastman did layout the issue, there’s something that feels off about the art. The composition and layout are fine, and the turtles look like turtles who are waling on their hind-legs and kung-fu fighting, but it just doesn’t look like the TMNT books from ages ago. When you boil it down, that’s okay too, as this is a different creative team, telling a different story.

I think the one thing that makes everything feel off is that this issue is in color. Originally, the issues were black and white, and I was hoping this series could have been in that same style. The water color wash that appears to have been used on the panels not really something i like in my comic book art, but that is my personal taste and may not be how everyone else feels.

This isn’t the worst Teenage Mutant Ninja Turtles book I’ve ever read. As a new series, with a new take on old characters, this story has a bit of everything and it works rather well. There is plenty of setup, and while no real reveals are made, it’s enough to bring me back for another couple of issues. If you like the Turtles franchise, or are looking for something different to pick up, Teenage Mutant Ninja Turtles #1 is worth checking out, and earns 3.5 out of 5 Stars.