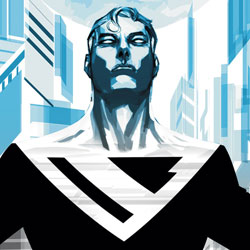 Much praise has be heaped upon the Batman Beyond universe. It gave us a look at what might come in the next twenty years, and gave us a new group of heroes to root for. While we’ve seen the adventures of Batman, and the Justice League, we’ve only seen Superman here and there. Now he get’s his own story, just in time for everything to change forever. Previously in Superman Beyond: Rocketed from the dying planet Krypton, young Kal-El was adopted by a Kansas couple and raised as one of their own. Later, working at the Daily Planet as Clark Kent, the Kryptonian could take to the skies, righting wrongs, and punishing evildoers as Superman!

HE’S DIFFERENT THAN ME AND YOU

We’ve known – or at least the mythos has told us – that Clark Kent, Kal-El, Superman doesn’t age at the same rate as the rest of us. When we’re in our eighties, Superman barely looks 50. But this slower rate of aging does make us wonder if Superman is susceptible to other horrors of old age. That is what this issue exams.

Having taken care of an alien invasion on another planet, Superman decides to return to Earth to live out his days. But when you are a super-powered being, even one whose strength might be wavering, trouble is going to arise that needs your attention. And that’s what happens when an incarcerated criminal stumbles across some left over sludge from an abandoned Lex Luthor facility which turns the criminal into an abomination – but not THAT Abomination.

Half Clayface, half Absorbing-Man, Mangler Macarro is set on seeing his little girl again, and nothing is going to stand in his way – not the police, not the Justice League of America, and if Marco has his way, Superman won’t prevent him from his quest. What plays out across the issue is a smack down drag out fight, as Superman, admitting he’s not as strong as he once was, struggles to bring down the Goliath. He does of course, but not before Marco scares the heck out of his daughter, which makes the criminal realize his rehabilitation means nothing when he’s a big monster.

But beyond the big fight sequence, this issue has several quiet moments that make us realize that even though Kal-El was born on another planet, he’s very much human. The moment when readers see Clark tending to the graves of his parents, mourning over the loss of Lois, and even having a comical exchange with the aged Bruce Wayne make this issue well worth it. While this is not Superman at Earth’s End, it is a great story bringing Superman front and center into the Batman Beyond universe.

While Tom DeFalco and Ron Frenz did the rough art for the issue, Sal Buscema does an admirable job at bringing the issue together. The fight scenes have power in the panels and each blow resonates across the page. While it’s easy to simply add white streaks to Superman’s jet black hair, showing the hero struggling under the power of his opponent takes skill.

While the world of Neo-Gotham is rendered in shades of black, red, and gray, Metropolis of the future still has a lot of color to it. Instead of going for garish color combos, the hues are natural and the final result are superb.

I really enjoyed this look into the life of Superman of the future. His previous appearances have been more of the supporting role than central character. This issue has everything one expects in a Superman story, and it works well. I don’t know if it is worth the $3.99 cover price, trimming a few pages of the fight scene would have been okay by me, but Superman Beyond #0 is certainly worth checking out. While we don’t know what is going to happen a month from now, I hope we get to see more adventures of Superman Beyond in the near future. I’m giving Superman Beyond #0 3.5 out of 5 Stars.