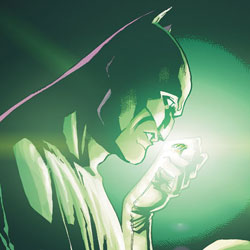 As stated on the variant cover, “Batman + Guy Gardner = Worst. Team-up. Ever.” But in the best kind of way. Green Lantern Emerald Warriors #13
“2011: A Space Oddity”
Writer: Peter Tomasi
Pencils: Ron Frenz
Inks: John Dell w/Marc Deering
Colors: Gabe Eltaeb
Letters: Rob Leigh
Cover: Dan Panosian
Variant Cover: Pete Woods w/Brad Anderson
Assistant Editor: Darren Shan
Editor: Brian Cunningham
Previously in Green Lantern: Emerald Warriors: The War of the Green Lanterns caused some major upheaval in the Green Lantern Corps, leading Hal Jordan to be kicked out, and John Stewart to be hated by many for his killing of Mogo. All of that is irrelevant, however, because this issue is a pure one-shot of Guy Gardner and Batman teaming up to solve a mystery.

One Punch and Done

We’re leading up to the relaunch, which means one of two things is happening in most DC titles: they’re wrapping up loose ends and ending with a bang a la Batgirl or Secret Six, (or a whimper, in some cases), or they’re running a filler arc or a series of one and done stories to end things. In the wake of the War of the Green Lanterns, Emerald Warriors has done the latter.
I had high hopes for the Emerald Warriors title when it came out, and at first it was alright, but I felt it didn’t really do a good job showcasing how fun Guy Gardner’s character can be. My first exposure to him was in the JLI days when he had that awful bowl cut (which, given that everything else in the relaunch reeks of the 90s, I was hoping would come back). Guy was obnoxious, belligerent, and practically unlikeable. And in fact I despised him at the time, because he was that much fun to dislike. But as I worked my way to modern comics, I found myself appreciating his character more and more, especially the unlikeable traits. My favorite moment in Blackest Night was when Kyle died and Guy went red, and dual-wielded the green and the red rings. If I remember, there was a splash page of him making a green anvil and a red hammer and smashing black lanterns with it–that was pure Guy Gardner kicking butt and not bothering to take names. Tragically, the Emerald Warriors series was too focused on setting up the War of the Green Lanterns (which is understandable, and probably a lot of people liked), and didn’t have enough of Guy just being Guy, though the moments on Green House where Guy fought Hal were perfect.
What all this exposition is leading up to is the fact that this one-shot story captures everything that I love about Guy Gardner. He comes into the action arrogant as ever, puffing out his chest and proclaiming to Batman–the world’s greatest detective–that he is going to have to play secondary role in the investigation because Guy Gardner is working primary on the case. Batman acquiesces, considering he’s more interested in doing real detective work to solve the crime anyway, and lets Guy interrogate the suspects. Of course while Guy wastes time interrogating, Batman solves the mystery, and then of course everything goes south and we get some action sequences where Guy and Batman work together to save the crew and the day. The story’s concept is solid, as is the execution, and it resolves with Batman punching out the criminal and Guy of course commenting “one punch,” referencing the famous JLI one-punch. Overall the story was exactly what I like for a one and done issue.

The art for the issue is just decent; there were a few inconsistencies that bugged me; while Guy has a buzz cut for most of the issue, when he is grimacing in concentration to slingshot the falling space station back into outer space his hair apparently grows several inches, and then reverts to normal. Additionally characters’ apparent ages fluctuate a bit, but other than that there aren’t any horribly glaring flaws, but the art isn’t anything to write home about.

Overall, this is a well-written one and done story that is a fine way to conclude the series for now. It doesn’t try to do anything spectacular, but it tells a fun story with some clever dialogue, and gives a great shoutout to long-time fans with the one punch reference. Well deserving of 4 out of 5 stars, and could’ve been bumped up to four and a half with better art.