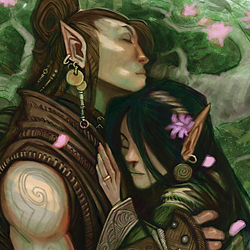 Raise your hand if you’ve played Neverwinter Nights for PC! I didn’t mean literally, put your hand down, you’re at work! You want your boss to see you?

Alright, that was close…

…Anyway Wizards of the Coast is apparently aware of all the love that game (by the now famous Bioware game studio) has garnered over the years. And so for the first time WoTC has dedicated a whole supplement detailing the Jewel of the North.

…which has been hit by a meteor.

Ok, it wasn’t a meteor, it was an exploding volcano, but the sentiment is the same. One of the most frequent complaints against the D&D settings of the past was that the world was full of awesome, epic NPCs that made it very difficult for players to make a difference in the story. WotC listened and when they launched the Forgotten Realms campaign for 4th Edition they wrote in the Spell Plague, an event that changed Faerun drastically. This allowed for PCs to once again explore the Forgotten Realms without fear of being unceremoniously smote by a 25 hit-die wizard/spellsinger.

And since it worked before they did it again! The Neverwinter Campaign Setting picks up 10 years after Neverwinter, having largely escaped the ravages of the Spellplague, gets totaled by a volcanic eruption. This means that the player characters can, once again, become the movers and the shakers in the campaign world.

Low level play! The setting is largely built for characters of 1st through 10th level. No complaints here. Most games start out around heroic tier, so it’s certainly not a problem, especially with the rest of the forgotten realms out there for when the players outgrow Neverwinter.

Character Themes! theses types of bonuses, introduced in the Dark Sun campaign setting, include additional powers and features for your character. Now, do they really tie the character closer to the story like the book says? Not particualrly, but they do add a little bit of flavor-covered mechanics to distinguish Neverwinter characters from others. As in Dark Sun, these are very specific to the setting.

Characters Make a Difference! Certainly a good thing, but the book kinda beats you over the head with this one. Then again that’s always been Dungeons & Dragons’ style. It’s kind of funny that even when D&D is encouraging you to do your own thing they still do it by zapping you with a cattle prod.

Frontier Feel! Yes, this is here, and it works well.

Intrigue Abounds! Also yes, this book does have a lot of story hooks, both heading toward the future of the city, and unraveling the past.

The Story Goes On! Hey guys, you know how other constrictive settings make it look like the story will never change? Not us, man, we’re cool, largely because CHARACTERS MATTER!

Adventure is Everywhere! Again, yes. The book does a good job of providing a lot of hooks for the characters to get involved (since they matter and all)

Also, Check Out the Suite! The Neverwinter Campaign Setting is part of a multi-platform suite of products which include video games, novels, gaming store events and even board games. Which is cool since it allows for progressively deeper levels of involvement.

As is to be expected, the art is top notch. 4th edition books have a great look and Neverwinter continues the trend. I do cringe a little when I see art that I’ve seen in other D&D releases. But I also understand that most people probably don’t care about that.

Mechanically, the primary draws of the Neverwinter Campaign Setting are the Themes that characters can access at first level. That said, it also features new options for wizards and clerics. My quick assessment is that the Spellsinger and deity domain options are balanced enough, and although the themes are powerful they’re balanced by the fact that everyone gets them. Oh, also I’ve gotten some flack before for not mentioning that a particular source book is ‘full of D&D essentials stuff’. Just so you know, this is. The new class options for wizards are written in the new essentials presentation, as is every other relevant power.

A Clarification and Some Parting Thoughts

All around the Neverwinter Campaign Setting is a complex pill to swallow. It strikes a strange balance between a setting that is familiar, and a setting that was familiar but now is under 16 feet of volcanic rock. Likewise, although I certainly appreciate the book’s enthusiasm to let you take control of the plot, sometimes it comes across like a loud girl shouting “MMM-HMMM GET DOWN WICHOBAD SELF!” Which is a little off-putting. That said, once you have processed the book, and rely on it largely for reference that may well take a back seat to the actual game.

I’m giving the Neverwinter Campaign Setting three out of five stars, certainly an above average effort, but restarting Neverwinter from scratch works against the book almost as much as it works for it.