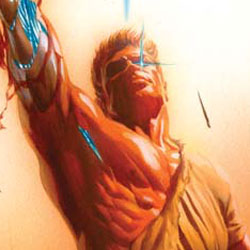 “Gentlemen, we can rebuild him. We have the technology. We have the capability to build the world’s first bionic man. Steve Austin will be that man. Better than he was before. Better… stronger… faster.” Previously in The Bionic Man: Once upon a time a guy wrote a book, that was used as the basis for a made for television movie. That movie turned out so well, that two more followed, which lead to a four year television series on ABC. As time went on, a spin-off series appeared, as did reunion movies years later. Toys and books sold well, and there were even record albums retelling key stories. There was even a comic book series from Charlton Comics where Neal Adams and Howard Chaykin appeared as frequent contributors.

Then things went silent, until one day, when a guy who got kicked of an airline was approached to bring his movie idea back to the four color press. This is the result…

The big surprise for anyone who picks up this issue is that there are a lot of things that happen before Steve Austin is turned into a cyborg. Here we learn of the prototype aircraft Colonel Austin is scheduled to fly, we meet Oscar Goldman, a civilian representing some branch of the military, a secret bionics laboratory, and we get to see our hero, Steve Austin in action.

The issue opens with a break-in at a bionics lab, where everyone is slashed and hacked to pieces by a guy with a samurai sword, but the big surprise is that the assassin is a cyborg! If you don’t smell the extra crispy deep frying which signals conflict a’comin’ between the title character and this low-tech wannabe, then I feel sorry for the youth of America. I also feel sorry for those that like to resolve conflict by deep frying things…

Smith and Hester do one thing that is really important in this issue; we get to see Steve Austin before the accident. We learn he’s engaged to be married, we know he is a hot-shot, but it isn’t an ego thing for him. We learn how strong Austin is as a person, and that makes him a sympathetic character. So, when the big crash occurs, the reader ends up feeling concern for the character and those in his life. Of course, we all know what is going to happen next.

Smith’s presence is felt in this issue in the dialogue exchanges between the characters, and even though there are poop and fart jokes that spring up, the more serious moments where Steve and Jamie converse actually feel like something a couple in love would say. I expect some will decry the potty humor as typical Smith, but I like it. It fits the characters and seems more natural than trying to force words into someone’s mouth.

The most disappointing part of the issue has to do with the opening lines of the television series. I really wanted the issue to get to the crash and the immediate aftermath – namely the Oscar Goldman’s famous words. If they would have made that moment the one that closed out the issue, I would have had an even more satisfying reaction overall. But other than that, there’s not much to complain about. It moves quickly, there’s plenty of setup and mystery, and the cliffhanger ending does work (though not the way I was hoping).

Even though one would think the world of the Bionic Man would be filled with chiseled fly-boys, and military men in their prime, Jonathan Lau does a great job of giving all the characters a unique look. There are fat guards, and nerdy scientists of all shapes and sizes, and the female character is well handled. I really like the Oscar and Steve characters as they are the most distinct (providing you aren’t counting the Wilfred Brimley doctor type), and should provide some visual distinction as the series proceeds. The art in this issue is good, but there is the general feeling that this issue is following a house style.

The mysterious cyborg wrecking the government’s plans is a great addition to the mythos of the Bionic Man, and ensures that I’m back next month for more action. I like that we get the prologue here as it makes Austin a more human character before the bionics kick in. Smith’s writing is smooth, and the reader is drawn into the action. Bionic Man #1 is one of those issues that you should probably pick up and earns 4 out of 5 Stars.