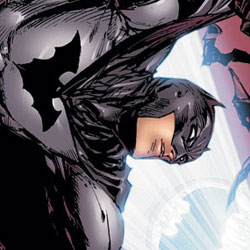 If you are going to end a long running series and start next month with a new number one, this is certainly one way to do it… Previously in Batman: Well, you really don’t need to know what happened before, as this issue features a tale the encompasses the history of the Batman in a nutshell.

If you ever wanted a great jumping on point to get into the Batman universe, then this is about as easy a jumping on point as any in recent times. Here the reader not only discovers what has gone on before, but those who have been loyal readers, finally get to see major personal growth by the one character that has been controversial since Day One – Damian Wayne.

Damian has never been a favorite of this reviewer, but I will admit he did have some of his best moments when dealing with more mature teenage super-heroines who he probably had uncomfortable feelings about. And while Damian isn’t the central focus of this story, the revelation at the end, that he trusts Dick, that he feels like it is an honor to learn and be friends with him is probably one of the biggest and nicest surprises of this issue.

While the history of Batman is described in broad strokes, new readers will discover nearly everything they need to know. Sure, there are some major plot moments that aren’t touched on – Batman’s Rogues Gallery, the female members of the Batman team, how Robin III became Red Robin, and so on, but it’s enough of a story to make this a really good #0 issue that serves as a lead in to next month’s relaunch.

And that is also the problem. As the last issue in the current numbering (that we know of at this moment) I was expecting a bigger tale, something bold, something epic that is a nice send off. If everything we have learned about the relaunch (that Batman isn’t going to see much of a history change), then this issue should have been the new launching point. This is the issue you would want new readers to get in on as it lays the groundwork for tales to come.

There are a few times when using multiple artists can be a big asset to telling the story. Here, we get a different artist every couple of pages to represent the era of that period of Batman’s life. When it works, it works well, but in this case, the isn’t a huge enough difference between the styles to pull it off. I didn’t feel like I was seeing Batman of the ‘40s, ‘60s, or ‘00s in this book. Each period has a unique look, and simply having an artist draw the characters in the costume of the period isn’t enough.

There are some beautiful pages in this issue, and the artists do solid work, but since this tale is being told through the eyes of one character, it almost seems like the reason for the multiple artists was necessitated more by deadline than story.

Batman #713 is full of schmaltz, but it’s schmaltzy in a way that doesn’t make you roll your eyes, but rather makes you look forward to what is going to happen next. It’s a nice marker in the history of the Batman and his sidekicks, but it also isn’t super deep. Batman #713 is worth picking up, if for no other reason than to say you own the final issue of Volume 01. Batman #713 is a solid read, and earns 3.5 out of 5 Stars.