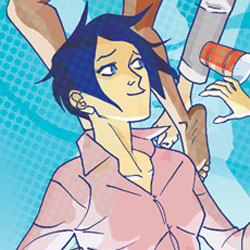 Image Comics sent Major Spoilers a sneak peek of titles arriving this week.  Take the jump for an early look at All Nighter, The Breed, and more.

All Nighter #3 (of 5)
“STEALING BOYFRIENDS”, Part Three
Though Donna and Jim are an item, Kit can?t suppress her romantic urges and attempts to secretly rekindle her romantic relationship with Jim. Martha and Kit form an unexpected friendship with each other that reveals some of Martha?s more obsessive qualities.

The Breed Collection Vol. 2: Book of Ecclesiastes TP (MR)
‘THE BOOK OF ECCLESIASTES’ Ray Stoner continues his journey of discovery, learning more about his demonic heritage and the ‘Fathers’ dark designs for Earth. This section of the ‘Breed saga starts off in a Shaolin temple in Tibet in the mid seventies, continues through the ’80s with Ray fighting alongside Central American rebels and ends with his costly confrontation with a mystical ‘Breed. Non-stop action and mayhem!

Deadlands: Death Was Silent (One-Shot)
Visionary Comics and Pinnacle Entertainment present the third one-shot of the weird Western world of DEADLANDS! A silent bounty hunter rides into a remote town, but the town holds dark secrets that may turn the hunter into the hunted. Superstars RON MARZ and BART SEARS team for a weird Western tale unlike any other!

A meteor falls in Santa Monica Bay, and the lives of Hip Flask, Ebony Hide, Obadiah Horn, Sahara and her father, Joshua Serengheti converge once again with far reaching consequences for all. Over ten issues worth of ELEPHANTMEN in one big package! New introduction by JANET ZUCKER. Collects ELEPHANTMEN #8-15, plus the Pilot issue and loads of extras!

Gladstone’s School For World Conquerors #4
The Skull Brothers battle an army of ancient Egyptian monsters while cupid’s arrow strikes Mummy Girl and Kid Nefarious! And what secrets do comic books featuring the parents of our supervillains-in-training reveal about Gladstone’s past? After this shocking discovery nothing will ever be the same.

Halcyon TP
What happens when the neverending battle for truth and justice…ends? With crime and violence nonexistent, and the human race seemingly neutered of all aggressive tendencies, the superheroes of HALCYON appear to have completed their mission. But one member of the team isn’t pleased with this new development, and will stop at nothing to uncover the catalyst for this global phenomenon. Including never-before-seen extras and behind-the-scenes artwork! Collects HALCYON #1-5