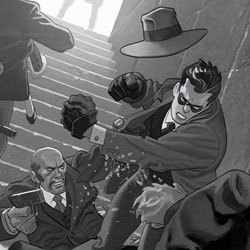 Of all the ways to end a series, this was certainly one of them… Previously in The Spirit: Someone thought it would be a great idea to tell more stories of Will Eisner’s The Spirit, and on the surface they would be right; a masked hero fighting the good fight, against the bad guys of the world, protecting the down-trodden and unfortunate… Sometimes the dream and reality have a way of not aligning…

To close out this Spirit series, the entire issue is touted as a Black and White Big Finish Issue. While it may be a final issue, and it is in black and white, the three tales told feel like DC had a bunch of 8-page backup tales that they paid for just sitting around, and the company needed away to get them out the door. It’s not that these stories aren’t interesting, it’s just that they don’t feel big. They feel like backup stories fronting as headline tales.

In the three stories presented, the first is a pure detective tale, as The Spirit tracks down the murderer of a philandering city councilman. “The Lesbians Did It” is that twist at the end that brings the titillation, but that is about it. The connection between points A and Z are not super solid, and it seems The Spirit is just grasping at ideas to get him to the end of these eight pages.

The second tale is more reminiscent of The Spirit tales I’m more familiar with – the good guy standing up for the newspaper vendor being pressured by a mob goon, that involves a lot of punching and fighting. This time, the ending is a real downer, and though the newspaper vendor isn’t the one at fault, the Spirit’s final words make it seem he was responsible for his own fate, and got everything he deserved. It’s taken me a couple of times to get through this story to find the meaning of those words, but I’m either missing something or heavy editing was done somewhere causing meaning to be lost.

The final eight-pager involves two night janitors at a museum commenting on all the different art styles around them, with each work being mimicked by the Spirit trying to take down some burglars. The punchline at the end was funny, but seemed to take forever to get to.

Don’t get me wrong, each of the stories is solid backup material, but strung together, they don’t carry the issue to a satisfying end.

BLACK AND WHITE ON GLOSSY PAPER

The artists for each of these short tales do a fantastic job. From Bolland’s blondes, to Jose Luis Garcia’s washed work to Russell’s take on classic art really stand out. The fact that the stories are told in black and white and look good in each is a testament to the artist’s ability to move the reader without the use of color. My favorite is the Garcia chapter, as I really like the washed look – it reminds me of the Conan tales from ‘70s and ‘80s.

What would have completely sold this issue for me is if DC had made everything in the issue black and white. Instead, tales are broken up with big color ads that pull the reader completely out of the story, and when one does return to the story, it takes a moment for everything to settle back down. When I think of black and white comics, I usually think of them as printed on newsprint or lower quality paper, and not on high gloss. I don’t know if there would have been a high cost difference or not, but I think it would have been fitting for the series to go out on the same material the Spirit started in so many decades ago.

BOTTOM LINE: There’s a reason the series is ending

The fact that DC is relaunching its universe with all new number ones has nothing to do with this series being cancelled. The idea behind First Wave was a great one, but I think somewhere along the way someone thought it would be better to mash the past and present together to create a different world, and honestly, I think it had readers scratching their heads and setting the books aside for something more familiar. If you are completist, then you’ve probably already picked up this issue, but if you haven’t, The Spirit #17 is one you can leave on the shelf until the next time someone decides to relaunch the series. The Spirit #17 is solid, but disappointing, and earns 2 out of 5 Stars.