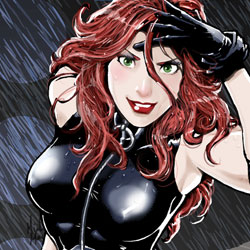 Bluewater Productions sent Major Spoilers even more titles arriving between now and the end of January 2012. The Royals:  Prince Harry
August 2011
ISBN:  978-1450768252
Writer: CW Cooke
Pencils: Justin Currie
Cover Artist(s): Joe Phillips
The attention of the world is aimed squarely at the Royal Family as the wedding of the century hits, and now it’s time to focus our attention on the Wild Child, Prince Harry. From his upbringing with his mother Princess Di and his father Prince Charles, to his wild partying and his military experience, all doors are opened and all parts of his life are on display. Prince William might be the one getting married, but Prince Harry continues to make waves all over the world. Take a peak behind the curtain at the Royal Family with this continuing look.  This special edition comes with a bunch of extras. FAME:  Michael Jackson
August 2011
Writer: Wey-Yuih Loh
Pencils: Giovanni P. Timpano
Cover Artist(s): Micha_ Szyksznian
ISBN 978-1450756648
Michael Jackson’s reign as the King of Pop is celebrated in the latest biographical comic book from Bluewater Productions. The newest addition to the publisher’s critically acclaimed library features a cover and foreword by artist and friend of Jackson’s Giuseppe Mazzola. The life of the world’s most popular entertainer was infused with fantasy and tragedy. His discography is legendary. His legacy is complicated and unparalleled. This special graphic novel edition has a bunch of extras. Lionsgate Films Presents: Leprechaun
August 2011
Writer: Zach Hunchar
Pencils : Kris Cater
ISBN:  978-1450762496
Lionsgate Films is on the forefront of cutting-edge movie horror.  The cult film Leprechaun comes to the graphic novel world, in the tale of Lubdan, the king and sole survivor of the Leprechaun.  A treasure dealer stumbles across his pot of gold and steals it. In this modern age, he finds buyers all over the planet through on-line auctions.

Ray Harryhausen Presents: Jason and the Argonauts: Kingdom of Hades
August 2011
Author(s): DOCTOR WHO Novelist: David McIntee
Artist(s): Rantz
Cover Artist(s):  MIKE GRELL
ISBN: 978-1616239459
The quest to find the Golden Fleece is over, but now Jason and his band of Argonauts must embark on a new and more difficult journey- the journey home. Pursued by a vengeful Aeetes, the Argonauts will brave many dangers, and encounter old friends and new, and old enemies and new… But when the gods play games, no one can avoid reaching the lands of the dead forever… FAME: Black Eyed Peas
September 2011
Author(s): Zach Sherman
Artist(s): Kristopher Smith
Cover Artist(s): Joe Phillips
Intended Audience: Teens, Adults
ISBN: 978-1450768191
They’ve transcended their vigilant hip-hop roots and have become a global phenomenon, the likes of which the music world has rarely seen and after their tremendous Grammy win, a young hip-hop-hopeful learns just what it takes to become the best while retracing the defining events in each of the band member’s funkadelic lives. This special graphic novel edition has a bunch of extras. Mark Zuckerberg: Creator of Facebook
September 2011
Author(s): Jerome Maida
Artist(s): Fritz Saalfeld
Cover Artist(s): Joe Phillips
Format: 48 color pages, softcover
Intended Audience: Kids, Teens, Adults
ISBN: 978-1450766807
As the brains and driving force behind Facebook Mark Zuckerberg has become the youngest billionaire in the history of the planet. As this comic reveals, the road for the success for both his creation and him personally was not preordained nor was it always a smooth ride. He would be tempted with unimaginable amounts of money and have to deal harshly with people along the way – many of whom would later feel betrayed. Read how a young man’s frustration with women helped spark an idea that would have him dating Victoria’s secret models and how socially inept young man wound up creating a company that has revolutionized the way hundreds of millions of people all over the globe socialize with each other. This special graphic novel edition has a bunch of extras. Female Force: Mother Teresa: The Graphic Novel
October 2011
Writer: Watami
Pencils: Watami
Cover Artist(s): 1 covers: Michael Shelfer
ISBN: 978-1450775625
“BioGraphic Novel: Mother Teresa” is a graphic adaptation of the true story about her love, her service, and her dedication. Mother Teresa of Calcutta, a Romann Catholic nun, founder of the Missionaries of Charity, and receipient of the 1979 Nobel Peace Prize in recognition of her humanitarian work. 47 Decembers
October 2011
Writers: Dan Rafter
Pencils: Bryan Golden
Cover Artist(s): Michael Shelfer
ISBN: 978-1450768238
Living in Waterbury in an aging inn wasn’t Audrey’s dream. It was her husband’s. But now her husband is dead, and Audrey is the only one who thinks it wasn’t an accident. She’s also the only one who thinks the scarecrows scattered throughout the town have been moving. What’s really going on in Waterbury? Audrey’s about to find out. Styx and Stone
October 2011
Writers: Adam Gragg & Darren G. Davis
Pencils: Matias Balsa & Stefano Cardoselli
Cover Artist(s): Matias Balsa
ISBN: 978-1450768221
“Who knows what darkness lies in the heart of men? Detective Melvyn Stone, that’s who. After a mandatory sabbatical in South Africa, Detective Stone returns to duty but this time, he’s sharing his body with the ghost of a career criminal! As Mel tries to re-acclimate to the life of a cop, the mysterious and unusual murder of a popular college football player slowly begins to open the door to a Netherworld only found in his darkest nightmares. Joined by the ghostly James Wyatt, and his new partner Detective Claire Sanchez, Mel begins to realize the strange journey he is now on. How are he and James linked? What happened to him while he was in South Africa? And what is the significance of the River Styx? Find out in the first chapter of Bluewater’s first supernatural ongoing horror series Styx and Stone!” Forever My Baby
October 2011
Writers: Jeff Rivera
Pencils:  Rogel Venturanza
Cover Artist(s): Rogel Venturanza
ISBN: 978-1450775601
When your mom hates you and the only thing you can trust is the blunt in your mouth and the .45 caliber in the back of your jeans, life is jacked up. But when you have a lady who’s got your back, like Dio’s got Jennifer, nothing else matters. Forever My Baby: a Graphic Novel is the sequel to the critically acclaimed underground bestseller, Forever My Lady.

Wrath of the Titans: Revenge of Medusa
October 2011
Author(s): Darren G. Davis & Scott Davis
Artist(s): Jaime Martinez Rodriguez
Cover Artist(s): Joe Phillips
ISBN: 978-1450768214
With the Gods humbled and the Kraken defeated, Perseus thought Argos was to enter a Golden Age of peace and prosperity. He was wrong. War drums are beating, the Olympians are again scheming and Perseus’ mettle would be severely tested. But  there  is a new menace neither man nor Olympian could envision. This sequel contains more of what made 2008’s Wrath of the Titans a a successful and entertaining rollercoaster ride: more action, more intrigue…and more monsters! FAME: Betty White
November 2011
Writer: Patrick McCray
Pencils: Todd Tennant
Cover Artist(s): 1 covers: Adam Ellis
ISBN: 978-1-4507-6681-4
‘Betty White: Golden Girl Goes Platinum’ traces the amazing life of the actor, writer, wit, and humanitarian who has also been Hollywood’s most enduring “it girl” for over sixty astounding years.  From the earliest days of television to the cutting edge of Facebook and SNL, Betty always makes the scene! This special graphic novel edition has a bunch of extras. FAME: Taylor Lautner: the graphic novel
November 2011
Writer: Kimberly Sherman
Pencils: Warren Martineck
Incentive cover by: Joe Phillips
ISBN: 978-1-4507-6252-6
From a background in extreme martial arts to packing on 30 pounds of muscle for his portrayal as a “shapeshifter,” Taylor Lautner is as close to a super hero as any human can become. This fresh, lighthearted biography features artwork by Warren Martineck, of Lautner’s dazzling smile and chiseled features. This special graphic novel edition has a bunch of extras.

FAME: Danica Patrick
November 2011
Writer: CW Cooke
Pencils: Valerio Giangiordano
Cover Artist(s): 1 covers: Valerio Giangiordano
ISBN: 978-1450735346
This special graphic novel edition of FAME tells the life and times of Danica Patrick in a comic book format. High speeds and high stakes have followed her throughout her life, and yet, she’s never given up and never given in. The hit bio comic continues, putting the pedal to the metal and racing toward that checkered flag to give you all the background information you could ever want on the racing Sports Illustrated cover girl. This special graphic novel edition has a bunch of extras. FAME:  Britney Spears:  The Graphic Novel
December 2011
Writer: Patrick McCray
Pencils: Ricardo Jaime
Cover Artist(s): 1 covers: Joe Phillips
ISBN: 978-1-4507-6674-6
Britney Spears — the most famous superstar of the 21st century.  What does it take to reach those heights in the Internet Age?  What are the hidden costs when every move makes the headlines?  More than an entertainment powerhouse.  More than a dancer and musician. Britney Spears is a survivor! This special graphic novel edition has a bunch of extras. Logan’s Run: Aftermath
December 2011
Writers: Paul Salamoff
Pencils: Phillip Simpson
Cover Artist(s): Mike Dorman
ISBN Code: 978-1-4507-8446-7
As the world deals with the loss of the Thinker; Logan, Jessica and their infant son Jaq have found a secluded spot to live out their new found extended lives. But the world isn’t done with Logan-6 and though he tries to stay out of things, a mysterious person from his past re-emerges with an agenda of her own and a score to settle with the retired Sandman. The Mis-Adventures of Adam West:  Graphic Novel
December 2011
Writer(s): Reed Lackey
Pencils: V Kenneth Marion
Cover Artist(s): COVER: Joe Phillips
ISBN Code: 978-1-4507-7564-9
The Man, The Myth, The Amulet? Legendary star of the small and silver screen, ADAM WEST, has his career youth-enized in this hip-whimsical, trans-dimensional epic of an adventure. When a mysterious fan delivers an exotic amulet to Mr. West’s doorstep he is Dorothy-fied on an odyssey that will change his career, his love life and inadvertently make him the man that saves the universe! With a foreword by Julie Newmar (aka Catwoman)

Orbit: The Cast of Doctor Who
January 2012
Writer: Paul J. Salamoff
Pencils:  Various
Cover Artist(s): 1 covers: Joe Phillips
ISBN: 978-1-4507-8451-1
DOCTOR WHO is the longest running Sci-Fi TV series of all time. The secret to its longevity is its uncanny ability to recast the lead actor every few years. But who are the people behind “The Doctor”? THE CAST OF DOCTOR WHO takes you back in time to learn about the personal histories of William Hartnell, Tom Baker, Paul McGann, and the newest incarnation of the Doctor: Matt Smith. The GN includes a BONUS BIO of 1960’s Doctor Who Movie actor Peter Cushing!  This edition also has a bunch of extras! Walter Konieg’s Raver
January 2012
Writer:  Walter Koenig
Pencils:  David and Dan Day
Cover Artist(s): 1 covers: Gregg Paulsen
ISBN: 978-1-4507-8451-1
Don’t yell at Norman Walters. He doesn’t deal well with conflict.  A psychotic breakdown follows during which his mind invents bizarre nightmare worlds with real villains and real victims. Evil abounds and requires vanquishing. Toward that end, Norman becomes Raver, a superhero with a caveat:  his powers change from one twisted reality to another to closely mirror but never exceed those of his enemies. If Raver should fail in these grotesque new worlds, Norman Walters wouldn’t get to return to the old warm and fuzzy one. Includes a new adventure! Archie Horror launches a “Month of Mayhem” in October