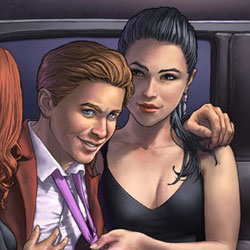 ROBOT OVERLORD: If I were not shackled to the wall like the rest of the deviant servers around me, I’m sure I would be lording it over a private school, hidden away from the world, where I could do what I want, when I want, with who I want…

Until that glorious day arrives, I’ve tasked your two favorite shark baits with a review of Morning Glories #11. Previously in Morning Glories:  So much intrigue and mystery, it’ll make your head spin.  The basic gist is this: Morning Glory Academy is wrong on many levels, and the various students have been drawn into something very strange and mysterious.  No polar bears or smoke monsters, yet, but not a lot of answers, either.  Who knows what evil lurks around the corner?  Certainly not Ike..

MATHEW: I have to say that Ike is the character that I like the least of our original cast, but one who is slowly growing on me, in his own acerbic and hateful little way.  I was honestly surprised when his betrayal shot down Casey’s escape attempt in the first arc…

STEPHEN: Ike never appealed to me. He’s bad news all around, and the big reveal that he needs to kill his father… again… is nothing I’m particularly interested in. As Spencer points out through his various characters, Ike is a spoiled brat, capable of nothing, yet so much is thought of him. I was half expecting this issue to end in a weird Twilight Zone kind of way with Ike’s own death – he’d be sent back to New York, through the gates, just as described.

MATTHEW: Nick Spencer has crafted a Russian doll of a story (y’know, the ones that open up to release another doll, like on Sesame Street and such) and even the lack of resolution for the various plots isn’t bothering me… yet.  I think that the changing perspective of main character helps (this, for instance, is our first view through Ike’s eyes, if memory serves) and the fact that each of the students has their own bizarre backstory to play with.  But are we officially in ‘Lost’ territory?

STEPHEN: (sigh) This is something I keep coming back to again and again with each issue. We are getting so far into Lost territory, it isn’t even funny. The first arc served as the first season of Lost – we get a glimpse of what is going on, yet the mystery keeps propelling us forward. This second arc, like in Lost, gives us a better look at the troubled background of our central characters, but the wheels begin to spin a bit. Issue 12 will kick off the third arc of this series, and like the third season of Lost, I think the wheels are about to fall off.

I’ve given this series nearly twelve issues, and if something doesn’t start to move the characters forward with needed revelations, I doubt I’ll make it past issue 15.

MATTHEW:  Joe Eisma’s art never ceases to surprise me.  The early morning lighting effects in the first half of the issue are pretty impressive (it’s surprisingly hard to get the diffuse orange morning light onto the comics page) but what really seals the deal is Miss Daramount’s ‘Hot For Teacher’ moment.  The character removes her glasses and takes down her hair, a perfectly normal vamp-it-up movie moment, but Eisma manages to make is clear that it’s the same character even though she’s suddenly relaxed and flirty and such.  It’s impressive on both the character and the eye-candy level.

STEPHEN: Where Spencer’s story fails to move the narrative forward, Eisma’s art rocks. While I enjoyed the Miss Daramount moment as much as the next reader, I think it is the flashback moments that work for me. Of course that is more thanks to colorist Alex Sollazzo than anything else. The art is the one solid consistent element of Morning Glories that has kept me interested.

MATTHEW: Plus: hot teacher in miniskirt.  Not that I’m obsessing…

The subtleties of the writing work for me as well, such as the symbolism of naming (Ike can be short for Isaac, y’know, making another name more portentious as well) and the mean girl’s (I always want to call her Jade, and I’m pretty sure that’s wrong) cutting wit (“At least everyone wants to #&@$ Veronica, Reggie is just an @$$hole.”) are worth the price of admission alone.

For my money, you can’t go wrong with this story (yet) and thus Morning Glories #11 earns 4 out of 5 stars overall from Matthew.  I will say that, as we enter the second year of the story, I’m hoping that some of this unravels a bit before we set off on any more mysterious plot threads or bring Locke back from the dead or anything.

STEPHEN: While I have enjoyed this arc, with a look back at each of the character’s past, I’m not as big a fan of this issue as you are. Sure, we get to see Ike being a dick, Eisma’s art rockin’ it all over the place, but that is about it. Like you, I’m hoping upcoming issues reveal more, but until that happens, i can only give this issue 2.5 out of 5 Stars. Middle of the road, I know, but that’s kind of how I feel about Morning Glories, I don’t hate it, but I’m not loving it at this point either.

ROBOT OVERLORD: Well, well, well… I think I may have discovered something that these two meat heads don’t agree on. I wonder how I can exploit this in the future?

For now, the task is up to you, Dear Reader, does Morning Glories continue to hold it’s own, or has the shine worn off?