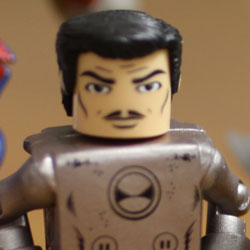 A box arrived on the Major Spoilers doorstep the other day, and after pondering whether it was safe to open it or not, we let the intern crack the package to see what was inside.  Diamond Select Toys sent us the 41st wave of the Marvel Minimate line, and after the jump, you’ll see the whole unboxing and our thoughts on the latest series of Marvel Minimate toys.

I should point out this is yet again another package delivered by a certain shipping company arrived banged up – though not as banged up as previous packages. Inside however, the contents were fine. This set did not include the chase Age of Apocalypse Mr. Sinister, but then again, one Mr. Sinister is probably enough. It’s an okay figure, though the heavy cape on the back tends to make it harder to get the figure to stand upright without tipping backwards.  That’s probably okay, since at least one hero will come to knock the villain down. The Spider-Man/Green Goblin 2-pack is really nice.  Not only do you get the figures, but a web for Spider-Man to swing in on, Peter Parker hair, a rope to tie Spider-Man up, the Goblin Flyer with flame stand, and interchangeable hands so Gobby can fling a pumpkin bomb. I really like the flyer and stand, though it tends to be a little forward heavy, so certain poses just aren’t going to be possible. Wait? The Green Goblin is Norman Osborn? Why didn’t anyone tell me this before!?

What I really like about the Norman head sculpt is the hair has modeled his wavy hair. Okay Hulk, it’s your turn.  This is a bigger version of the Hulk than what we’ve seen before – mainly because of the chest and arm pieces to bulk the figure up. When comparing figures to one another, having a Hulk figure the same size and mass as others is a bit of a let down. This is why I appreciate Diamond Select Toys and Art Asylum going that extra distance to really get this figure to stand out. Now for the bad side of this Hulk figure.  The bulky arms simply don’t work as well as they should.  In fact, moments after getting Hulk out of the box, his arm fell off. The other figure in this two-pack is first appearance Iron Man, which I really like. I think it would have been cool if the creators would have been able to add the necessary antenna, but the gun, and interchangeable hand with the flame thrower make up for it. While I do like all the interchangeable bits and pieces that come with these sets, but over the long term, I’ve noticed it becomes harder and harder for the hands to stay in their sockets without falling out all the time.  Unless you are a die-hard player of toys, you’re probably going to modify the figures to your liking, and then leave at that. I have nothing to say about the Nimrod figure.  I’m not familiar with the character to know how accurate the sculpt is, but I do know he/she/it is about to get its clock cleaned by the Hulk. If you’ve been buying Minimates all these years, some of these figures will feel like re-releases. I like the Spider-Man, Green Goblin and First Appearance Iron Man figures, and I really wanted to like the Hulk, but after the arm fell off, he became that tarnished toy that will seldom see any real action.  Nimrod and Mr. Sinister are okay, but don’t stand out as the most fun figures in the collection.  Two of the three two-packs are worth picking up, and if Marvel Minimates are your thing, then you’ve probably already wandered down to the store to pick these up.  I’m giving Marvel Minimates Wave 41 3.5 out of 5 Stars. Yeah… this is awkward…