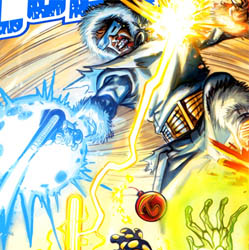 As we wrap up the events of the Flashpoint Universe, I remember the lesson of Marvel’s What If comics of my youth:  When we look at an alternate universe, things will inevitably look worse in comparison, and usually leave one or more people dead as a mackerel.  Why am I reminded of this?  Glad you asked… Previously, on Flashpoint – Citizen Cold:  Len Snart is a hard man in all worlds, but in this one, at least, he is a hero.  In the absence of Barry Allen, he is Central City’s greatest defender, but a defender with a very dark secret.  Now, the truth about his past has come to light, and the Rogue’s Gallery (ironically his own allies in the regular DC Universe) is ready to kill him for his crimes.  But how will he only ally respond when SHE knows the awful truth?

I’ll say this for Geoff Johns:  He knows what makes certain characters tick.  His reimagining of Captain Cold as a flinty leader-of-men is one of the most successful (and long-term workable) retakes on DC’s classic villains, and the decision not to change a single aspect of his relatively-ludicrous costume provides a great visual balance to the tough-guy dialogue.  Scott Kolins draws a mean Captain…  Pardon me, a mean Citizen Cold, and this issue begins with Snart beaten bloody, unconscious on Iris West’s couch.   Before he awakens, Iris realizes that he has purchased two plane tickets to Dubai (one in his name, one in hers) before Snart awakens and plants a big wet kiss on her.  Elsewhere, the Rogue’s Gallery regroups after being blown up last issue, and I am quite amused to find that the evil mirror universe version of Weather Wizard has a Spock-goatee.  The alternate Pied Piper, on the other hand, seems to have had part of his face disfigured, has a mechanical voicebox, and blames Citizen Cold for the murder of his best friend…  the late WALLY WEST.

Whaddaycall A Beautiful Plate With Nothin’ On It?

Y’know what always confuses me?  When a new Rogue is released, joining the likes of the Trickster, Captain Cold, Weather Wizard, Mirror Master and other clever names, they always seem to have a name like ‘Tarpit’ or ‘Murmur’ or ‘Basement.’  In a group with the originals, it’s as if the creators want to make certain we know who the scrubs are.  Maybe someday they’ll graduate to being Doctor Peek-A-Boo or Commander Girder.  In any case, the Rogues prepare for war, but get out-maneuvered by Citizen Cold, and new guys Tarpit and Fallout are quickly put on ice…  Yeah, that one was too easy.  I don’t feel good about that one at all.  The battle goes poorly for Mirror Master and Weather Wizard as well, but leaves Cold severely wounded and running for ground.  When he reaches his hideout, he finds Iris awaiting him, and thinks that she has agreed to run away with him.  Instead, he finds that she’s not alone, as the Pied Piper has told her the story of how Cold killed his pal Wally (whom sharp-witted readers will recall is/was Iris’ beloved nephew.)  And the end, when it comes, is both poetic and awful.

The Flashpoint universe is the quintessential crapsack world, and Len Snart’s story has been particularly emblematic of what a terrible place it is and not a whole lot else.  The three issues of this book seemed to be an example of a story that was well set up and thought out, but really didn’t have much of anywhere to go after that.  Would Iris find out the truth?  Well, it wouldn’t really be all that much of a story if she didn’t.  That said, it wasn’t boring, and any excuse to look at Scott Kolins art is a good excuse, and it gave Captain Cold (one of the characters I’ve always secretly kind of liked, when done correctly) a nice moment in the sun (you should excuse the expression.)  I didn’t care for the downer ending, and there was a trifle too much Iris West worship (even Barry’s SUPPORTING cast gets special treatment post-Final Crisis) for my liking, but overall it wasn’t a bad issue.  Flashpoint – Captain Cold #3 sets up some interesting things, but devolves into a series of murders and kind of comes apart in the end, earning mixed feelings and 2.5 out of 5 stars overall.

Faithful Spoilerite Question Of The Day:  Have there ever been any alternate realities that are perfect utopias?  Wouldn’t that be fun for once, to have the hero trying to get home and realizing that he’s undoing paradise?