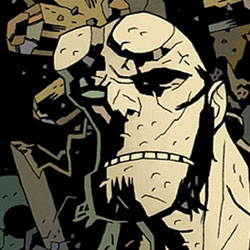 So this is it then? The End? The End my friend? Previously in Hellboy: The myths and legends of our youth are real. Monsters and bogeymen roam the night looking to abduct the young and innocent from their cribs. Witches and demons, from days long past, seek endless power and world domination. Armies rise using mystical artifacts that will lead them to victory. And in the closed space – that space that was sealed off from man, monster, and demon – the great old ones, the Ogdru Jahad, await to return to the world. Bad things have happened – many, many bad things. Fortunately, the demon who pretends to be a man, Hellboy, is there to put a stop to it once and for all!

Fans of Hellboy have followed his adventures since Mike Mignola breathed life into him in 1993, and though the Right Hand of Doom has done everything he could to prevent the world from falling down around him, in the end, the world still gets a big kick between the legs. This issue is panel after panel of Hellboy giving his all to bring down the mighty dragon, and in each panel, you can feel the blows. There’s almost a sense of hopelessness as Hellboy’s current love, Alice Monaghan (whom he rescued in 1959), watches as the world falls apart around her. Even worse is when Hellboy defeats the dragon, only to have Nimue rise up as a ghost and pluck Hellboy’s heart from his chest.

This world’s champion is no more.

And that’s it. Hellboy’s time on Earth is over. It’s been a frickin’ fantastic journey, and this final issue, from a story telling perspective was spectacular. What Mignola doesn’t say in words, the quiet panels, showing the destruction of Great Britain, leave the reader humbled and in awe. Like I said before, we’ve seen end of the world events play out in other books, but only Mignola brings it; giving us a look at the world through non-superhero eyes.

While the words are powerful, it is the art that smacks you in the head and says, “Pay attention, son. You’re about to be schooled in what it means to be awesome!” As it turns out, it is Duncan Fegredo that does the schooling. In a recent Major Spoilers Podcast, I bemoaned that those that want to ape Mignola’s style haven’t stepped up to the plate recently, but here, Fegredo delivers the Mignola style in such a way that you believe it wasn’t Mignola who introduced the look to the world, but Fegredo.

The way the panels are presented, readers get to see the world crumbling while Hellboy and Eimue exchange blows. And the contrast between the coloring of those panels gives the effect that the warriors’ blows are in fact causing the world to fall apart.

While the final issue of Death of Superman used full page panels to show the impact of the fight, Hellboy: The Fury #3 arranges the panels in such a way that we are only given the juiciest bits, and left to wonder what happens out of frame. It’s a powerful way to tell a story, and one that I truly enjoy looking at.

BOTTOM LINE: NOT THE END

While Hellboy’s time on Earth may be over, Hellboy’s adventures are not. In 2012, readers will get to see what happens when Hellboy goes home to Hell… and I’m gonna bet it isn’t a happy reunion.

The bigger question is, “Is this a permanent death?” Too often we’ve seen the central character die, only to come back months or even years later like nothing has happened. I’m hoping that Mignola keeps Hellboy off the mortal plane. Let the B.P.R.D. handle the mess left behind. Give readers one big arc of Hellboy in Hell, and then leave it at that. I’d be happy to see this opus end on that kind of a note.

Until 2012, Hellboy: The Fury #3 is a perfect way to send off the character – it’s one of those “Oh, Crap!” kind of moments that is fitting for this character. This is a great issue. It is an issue that should stick in comic readers’ minds as that one moment when the big guy actually bought it. Pacing, color, inks, everything come together to tell a perfect tale that has been building since the first appearance of the title character. If you haven’t picked up the first two issues in this series, do it now, then buy Hellboy: The Fury #3 – it’s a 5 Star experience you won’t soon forget.