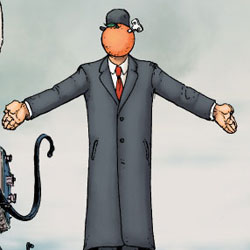 The last issue of this volume of Batman and Robin arrives in stores this week, and DC Comics has released a sneak peek, that you can check out after the jump.

BATMAN AND ROBIN #26
Written by DAVID HINE
Art by GREG TOCCHINI
Cover by CHRIS BURNHAM
1:10 Variant cover by J.G. JONES
Le Jardin Noir – France’s very own Arkham Asylum – falls under siege! Someone has freed the lunatics, and unless they can be stopped, they’ll turn Paris into a surreal Hell on Earth! Batman and Robin join Nightrunner in a mind-bending battle with the strangest lineup of villains this side of Bizarro World.