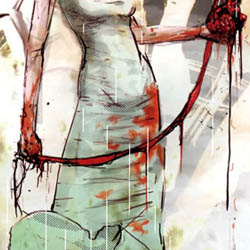 Or – “Something Beautiful That You Cannot Fully Comprehend…” When that happens, be glad you don’t write these reviews for a living... Previously, on Green Wake:  The city (if it actually is a city) of Green Wake is an anomaly.  Those that live there exist in a strange sort of half-life, awash in emotions and ennui, and each resident has his or her own crosses to bear, the scars of a life before Green Wake.  When a series of murders strikes the strange community, Morley Mack decides to unravel the mystery, mostly for lack of anything else to do.  As each successive event unfolds, it becomes clear that the mystery of Green Wake itself has become as important as the identity of the killer.  Morley and his partner Krieger have a suspect, they have a theory, but they still lack one important piece of the puzzle: clarity.

The Reveal That We’ve Been Waiting For.

First off, the cover of this book is simply phenomenal in its simplicity and beauty, a wonderfully subtle watercolor piece that immediately made me want to buy the comic book.  We find that Ariel, the mysterious newcomer to Green Wake (and also our main murder suspect) has secrets of her own, as her former lover Carl is revealed to her.  Is she the killer?  Is he?  I have absolutely no idea, but their reunion is touching and horrifying all at once, as Riley Rossmo’s subtle blues and greens transform into a red and black mass all at once, and the truth of the situation is revealed.  It’s an inspired trick of the art, moving from the diaphanous and dreamy visuals to a horrifying nightmare world reminiscent of Heironymous Bosch by way of Herschell Gordon Lewis.  Both Ariel and Carl find particularly poetic fates, and Green Wake itself may (or may not) be sentient.

It’s very hard to translate the sensations I get from reading this comic into words, because the art itself seems to take place in a reality all its own.  (Also, there are spoilers aplenty that you should be able to visit for your damn self.)  Morley and Krieger’s murder mystery is set aside as they contemplate the nature of their world, and Morley finally considers how and why he came to Green Wake, and the things he was running from when he arrived.  Morley’s own story takes center stage for the rest of the issue, and even in ‘the real world,’ Rossmo translates everything onto the page.  He completely changes his color palette and adopts a different line to the work when outside Green Wake, though, a small touch that really makes the first half of the issue that much more impressive.  We end with a cliffhange, a story hook designed to lead into #6, even though I was quite certain this book was solicited as a 5 issue miniseries.

The Verdict:  Eerie And Effective

We’re all friends here at Stately Spoilers Manor, and many of you are used to me giving drawn-out explanations of why I like or dislike a book, analyzing the art style, breaking down the story beats and like that…   All I can say about this book is that it reminds me of a rainy fall day in Western Kansas, where it’s cold and gray and the only comforts that you will find are the company of others.  It’s a story that is all about the base emotions that you feel, and the use of color and form throughout the story combine with the words to create a damn-near-perfect synthesis of words and pictures into one big thing.  From the deep blood red of Ariel’s hair to Morley’s tears of grief, everything about this book is an emotional response, and while I can’t really tell you quantitatively WHY, I shall have to steal a page from Rodrigo and just say:  And I liked it.  I actually kind of love it.  Green Wake #5 is surreal and beautiful and mysterious and it reminds me of every girl I ever loved and why key lime is my favorite, and thus it can only earn 5 out of 5 stars overall.  Maybe this isn’t the most informative review, but man this issue was good…

Faithful Spoilerite Question Of The Day:  What was the last book (or story or movie or show) that you just instinctively loved on a purely emotional level?