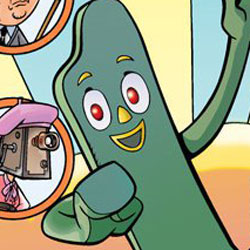 There’s a new player in Clokeyville, an off-kilt philanthropist named Mr. Golfer!   What is Golfer’s secret? What are the Wooly Mammals? Why are there astronauts selling the founding fathers the Andrew Jackson? Who stole Picnic Park? Who is helping the nefarious Blockheads?   And most importantly, how did Gumby become King of the Pirates?

The acclaimed Harvey nominated team of Chris Reilly & Jorge Santillan (Punch & Judy) reunite to answer all of these questions, and proudly present the momentous debut of Gumby’s grandparents in an all new Gumby and Pokey adventure like you’ve never seen before!

Still available for pre-order from DIAMOND COMICS (JUL111124), GUMBY (ONE SHOT) will be in stores in early September. GUMBY (ONE SHOT) is a 36pp comic book published by Gumby Comics.  Gumby and related characters are the trademark and copyright of Premavision, Inc.