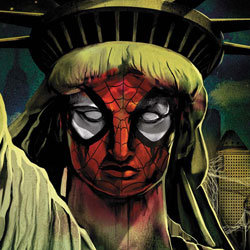 Something EVIL is invading Manhattan… at least that is what I, your great and powerful Robot Overlord, can only assume when an issue hits the six hundred and sixty-sixth issue. The Mark of the Beast comes in many forms, this one as the spider…

Take the jump as I make Matthew and Stephen twist and twirl as they spin their review of The Amazing Spider-Man #666. Previously in The Amazing Spider-Man: Peter Parker is busy. Between his gig as everyone’s favorite web-head, flipping back and forth between the FF and two Avengers teams, AND working as a scientist at Horizon Labs, he has little time to deal with NYC’s bed bug problem. That is until those bed bugs start infecting everyone with spider-powers.

STEPHEN: I step away for three issues to take care of really important stuff (sleeping), and suddenly everyone has spider-powers… Of course Spider-Man’s spider-sense is still out, which kind of evens the playing field a bit. This is an issue that just doesn’t stop – it has everything from Spider-Man taking down bad guys action, to real life, more bad guys, and extension of the Spider-Island plot, Spider-Man playing poker with the Avengers, Mary Jane AND Peter’s current girlfriend, and Spider-Man learning Spider-Fu – SPIDER-FU!

MATTHEW: I’m okay with the Spider-Fu, and not just because it means an appearance by Shang-Chi.  The Spider-Fu (and Spidey’s police radio, and his dispatching of poor Mr. Bench) is indicative of the new Spider-Man, balancing his new science job, two team memberships and his regular superhero gig.  It’s nice to see Spidey using his grand intellect for something other than quips and smart remarks, and really explains how brilliant Peter Parker is.

STEPHEN: Ever since I jumped on board The Amazing Spider-Man, Dan Slott has not disappointed me in terms of action that keeps moving through the issue. In know some people say this is the same stuff we’ve seen before, but this is the first time I’VE seen this stuff, so it’s new to me, and it works. At first I wasn’t too keen on the idea of Spider-Island, but so far so good as far as I’m concerned.

MATTHEW:  I’m not nearly as positive about it, as every moment that seems to be leading to the upcoming event had me faintly cringing.  I found this issue to be overwhelming in its sheer spectacle, jumping through hoops to get across how busy Spider-Man’s life is, and ending up being pretty off-putting as an actual story.

STEPHEN: As far as the art goes, I was sad to see Humberto Ramos rotate out of the art, but Stefano Caselli works wonders on the page. Not only do we get to see detailed skin, fabric, and line work, we get to see a really crowded NYC that feels and looks lived in. Half the time I found myself sucked into the backgrounds, the other half of the time I was admiring the layout and composition of each panel.

But credit can’t go only to Caselli here, Colorist Marte Garcia brought a lot to this issue, too. I love the shading, which is computer tweaked, but the subtle change from one color to the other isn’t glaring and harsh like some half-assed out of place lens flare thrown in to tell the reader, “Hey! I know Photoshop!”

MATTHEW: You leave lens flares alone.  They’re a valid form of artistic expression.  Besides, you don’t complain about the ones that come off your head during our recording sessions.  (OOOH, SNAP!)  But, seriously, I agree on the art, as Caselli is really good here.  He’s even better than he was on Avengers: Initiative, making everyone recognizable while giving some subtle design tweaks.  The big villain (who makes me both happy and sad, in that he has ties to both old-school continuity and a mid-90s unforgivable schmuckery), for instance gets tweaks to his design while being clearly identifiable.

STEPHEN: Bottom line for me – this issue worked, and it worked well. I like Slott’s fast-paced storytelling, as it is the perfect counter to the Bendis Ultimate Spider-Man stuff I’ve been reading these last six years. There is an interesting hook, Slott doesn’t give us everything, and I like just a hint of mystery of what is to come. I can tell you I won’t be reading all the tie-in issues, but I will continue reading this series. The Amazing Spider-Man #666 get 4.5 out of 5 Stars from me.

MATTHEW:  Well, parts of the issue really work.  The character work with the poker game, the FF sequence and the interactions between Spidey and the police worked, but the appearance by the new Madame Web felt tacked on for ominous intent.  There was simply SO MUCH packed into this issue that I was overwhelmed by it all, and no amount of lovely art can overcome that.  It’s good, but it’s not great, and it feels like the trailers for half a dozen different Spider-Man stories.  The Amazing Spider-Man #666 certainly isn’t as scary as the number would have you presume, but it’s not quite there for me, earning 2.5 out of 5 stars overall.

ROBOT OVERLORD: Well, well, well… it seems our two reviewers are not on the same page when it comes to The Amazing Spider-Man and his many, many, amazing friends… and friends who will soon be spider-men and women.  And let’s not forget the enemies. And the old people… old people with SPIDER-POWERS!

What did you think of the issue?  YOU’RE ROBOT OVERLORD COMMANDS THAT YOU USE THE COMMENT SECTION BELOW TO DISCUSS!