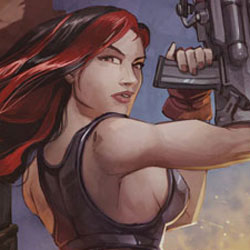 Arcana Studios, one of the world’s top producers of graphic novels, is pleased to announce that they are partnering with Framelight to co-produce big screen adaptations of El Arsenal and Frozen Wasteland, two of their popular graphic novels.

The producers for the projects will be Sean Patrick O’Reilly, owner of Arcana Studios, as well as Jeffrey D. Erb and Robert L. Robinson Jr. from Framelight. They are in talks with Michael Miner (ROBOCOP) to adapt the screenplay for El Arsenal. Created by writer Salvador Vazquez and artist Daniel Perez, El Arsenal (ISBN: 978-1-897548-17-2 / DIAMOND: APR100725) takes place in the fuyture when the world is on the verge of collapse, nations fight against each other for power and control, and the people suffer. The story focuses on mankind’s best hope, a Mexican mercenary who seeks a powerful biological weapon in cockroaches. In Frozen Wasteland (ISBN: 978-1-897548-69-1 / DIAMOND: MAR110853), published originally in 2007, America is covered in snow and rival gangs fight for control of Los Angeles, where law and order has collapsed, and the government, stretched thin as it is by troubles elsewhere, is afraid it will lose the city.

Arcana Studios, Inc. is a transmedia company that has aggressively pursued establishing brands through engaging storytelling and compelling art. With a strong foothold in the print publishing world, Arcana continues to be a premier content provider. Arcana owns one of the world’s largest libraries of graphic novels and comics, and has adapted this library into live action feature films, stereoscopic 3D animated features, episodic television series and toys.

Framelight Productions is an entertainment company focused on bringing the best in comic books and literary works to the silver screen. It was founded in 2008 by Bob Robinson and Jeff Erb. Projects on the slate include Gary Reed’s Caliber Press and Image Comics zombie series, Deadworld and the supernatural thriller Sins of the Fallen and classic tale 1001 Arabian Nights from Joe Brusha and Ralph Tedesco’s Zenescope Entertainment. Framelight intends to add video games and toy properties to its list of future film adaptations.