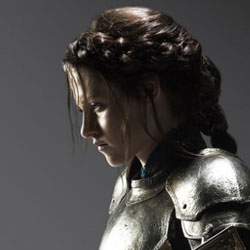 We haven’t covered the Snow White movies on the site that much, because A) casting was still up in the air, and B) there are actually a couple Snow White movies in the works. At the San Diego Comic Con, Snow White and the Huntsman got their own panel to promote Kristen Stewart as Snow White, Chris Hemsworth as The Huntsman, and Charlieze Theron as The Queen.

That’s a lot of big names for this movie from Universal Pictures. In a twist to the fairy tale, the Huntsman (Hemsworth) ordered to take Snow White (Stewart) into the woods to be killed winds up becoming her protector and mentor in a quest to vanquish the Evil Queen (Theron).