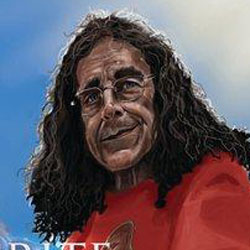 CEO William ‘Brimstone’ Kucmierowski announced today that Hound Comics, Inc. has officially acquired the talent of Peter and Angie Mayhew as well as former Disney artist Terry Naughton. The signing of Peter Mayhew, better known to the world as the man behind the mask of the most lovable Wookiee in the universe, ‘Chewbacca’, is a tremendous acquisition for our blossoming Hound Kids Division.

“We are excited to release ‘My Favorite Giant’ and ‘Growing Up Giant’ which will be dubbed, The Peter & Angie Mayhew Collection.” says Kucmierowski. Star Wars fanatics will have the opportunity to get inside the mind of Mayhew and grab an all-access pass through Peter’s youth in ‘Growing Up Giant’. Star Wars fans have never before seen this side of the 7’3” legend. “Even though he [Peter] is very shy, he readily agreed to share his story when I offered to help him write it.” stated Angie Mayhew. “I’m glad to be able to tell my story in a simple format with vibrant illustrations.” says Peter Mayhew, “I truly hope people will be able to gain some form of inspiration from reading this book, especially those whom may suffer with similar issues.” The quirky artistic style of Dawn DuJour compliments the intriguing storyline concerning Peter’s youth.

The true ‘diamond in the rough’ comes from the title, ‘My Favorite Giant’ which boasts art from seasoned artist, Terry Naughton. As a seventeen year veteran of the Walt Disney Animation Studios, Naughton brings a remarkable amount of established talent to not only the Hound Kids Division; but to the company as a whole. Naughton has been essential to the creation of some of Disney’s most beloved characters including, but not limited to, the Beast (Beauty and the Beast), King Triton (The Little Mermaid), and the Genie (Aladdin). “The addition of a skilled artist such as Terry to our family is icing on the cake, rounding out a very talented roster!” says Sajad Shah, Hound Comics VP. This is a landmark occasion for Hound Comics, the corporation that has been growing in leaps and bounds. “We are honored to have Peter and Angie on board. The books are fantastic and offer an extremely important message to our youth. We feel privileged that they would partner with us to publish their books.” says Marcello Carnevali, coCEO of Hound Comics. Plans for the Peter & Angie Mayhew Collection include distribution with some of the top big-box retailers not only in the United States; but in the world! “I’d like to personally thank everyone at Lucas Films for their personal involvement in the production of these two books.” says Literary Agent Jerry Cates, “Without their cooperation, we could not have written these stories the way they were truly meant to be told.”
via Hound Comics