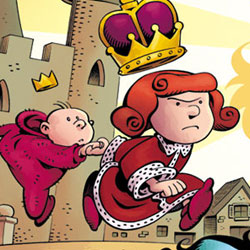 While at the San Diego Comic Con, Diamond Comic Distributors found Chip Mosher who not only rubs it in our face over the number of years he’s been to the con, but takes a moment to pitch the upcoming Snarked #0 issue.

Special $1 introduction to the eagerly awaited new hit series starting this October! You were amazed by his Harvey Award-winning run on The Muppet Show. You thrilled to his run on Thor: The Mighty Avenger. Now the next great Roger Langridge comic begins as he brings Lewis Carroll’s imaginative world to new heights in a side-splitting adventure that can only be explained as Snarked! Presenting a fresh and incredibly modern Langridgean spin on an already-warped classic, the Snarked epic adventure starts here with an all new, all original 8 page story featuring The Walrus and The Carpenter from Through the Looking Glass, the same Walrus that inspired the Beatles song ‘I Am the Walrus.’ This special includes a full issue’s worth of back matter that dives deep into the world of Snarked with an exclusive behind-the-scenes look at the new series.