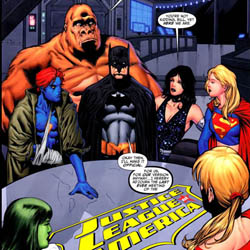 Or – “Before The New Comes In, We Have To Out With The Old…” After 30-odd years as a comic reader, I’ve come to the realization that there’s a sad truth about a Justice League of America comic book:  There is NO way to win.

Either you’re damned for including the “boring” Big Seven characters, or you’re damned for NOT  including the “bankable” Big Seven characters.  Either way the story suffers from the same nay-sayers who argue, alternately, “I don’t know why anybody would care about these people” and “We know nothing can change because everyone has to be alive in their own title.”  It’s a Catch-22 unmatched by any other title (though LSH and Avengers suffer from similar issues regarding their respective core three characters) and it has killed many a JLA lineup in the shell.  As we wind down the last days of the DCU as we know it, a JLA featuring Superman’s cousin, Batman’s ward, Wonder Woman’s half-sister, The Flash’s rival’s daughter, Green Lantern’s baby girl, an oddly-colored alien unrelated to but functionally similar to the Martian Manhunter and a gorilla much like the one who waltzed with Aquaman that one time, James Robinson tries to split the difference…  But does the halfway approach work? Previously, on Justice League of America:  When Hal Jordan pulled away from Black Canary’s JLA leadership (a moment that, combined with other character bits in the last two years, combines to make it seem that Hal Jordan is a completely misogynistic jerkwad), he founded his own team, which immediately plunged the JLA into it’s darkest moments since ‘Breakdowns.’  (The ‘Darkseid Rising’ arc technically never happened, thanks to a time loop, or it would be my call here.)  Dick “Batman” Grayson was able to revive the League with help from old partner Donna Troy, the team of Congorilla and Starman III, and occasional zappy kablammicus from all portions of the DC Universe.  For the last couple of months, though, Dick and his team have been battling the machinations of Eclipso in a story very reminiscent of his stunt in the DC annuals about a decade ago, and everyone is suffering.  Jesse Quick has no powers, Jade is possessed, and Donna Troy has just been impaled by Eclipso’s sword of darkness.  This could get ugly.

We start with a triumphant Eclipso remembering the moment that brought him to his triumph, and MY LORD is it wordy.  The first SEVEN PAGES of the book (out of 20 pages of total story) are nothing more than Eclipso monologuing about how he destroyed the moon, killed the JLA, took over the world and eventually brought even the Guardians of the Universe under his thumb, laughing heartily all the time.  We then see a flashback of the Justice League trying to find a weapon that will stop the living darkness, leading to Batman’s plan:  Saint Walker will use his inherent Blue Lantern powers of hope to show Eclipso his heart’s desire, trapping the lord of darkness in a mindwarp loop and giving the JLA a chance to defeat him.  From a reader’s perspective, I’m annoyed that this is EXACTLY how The Martian Manhunter defeated Despero during the aforementioned ‘Breakdowns’ crossover, but I’m more offended that I don’t recall ever hearing that Blue Lanterns had this ability.  Did I miss an issue, or have we fallen back to the old ‘Lantern’s ring will save the day!’ trick from the Silver Age?

Either way, it really doesn’t matter, as the JLA (plus The Atom and the original Green Lantern) puts their heads together and takes down Eclipso with with kind of speed you usually see reserved for squash matches against the Brooklyn Brawler.  Starman overcomes his own limitations to free The Shade, which then leaves Eclipso vulnerable to a multi-pronged light attack from Starman, Jade, Green Lantern and Saint Walker (with cameo appearanced by Cyborg and Doctor Light II) and then… nothing.  To call it an anticlimax would be an understatement.  Jesse Quick suddenly gets her powers back, promising to “explain later,” Green Lantern up and flies away to get crippled in that recent JSA arc, and the Atom pats our heroes on the back.  “I hope you get to be the JLA as long as you want,” says a proud Ray Palmer.  Smash cut to the next page, where Dick Grayson announces that they are disbanding their League effective immediately.

Wait…  What?  The caption assures me that five weeks have passed, but the letters page lets us know that this is the final issue of the current League, and thanks us for our support.

Given the eternal, glacially paced build-up to Eclipso’s reign of terror, it’s pretty clear that the plans for this issue had to be changed when the trigger was pulled on the DCnU.  Regular penciller Brett Booth is mercifully absent from this issue, which gives the visuals more oomph (Donna Troy doesn’t look like a starving waif, for one thing) but there’s no way to overcome the strong feeling that about three issues worth of developments were shoehorned into this one to wrap things up quickly.  Robinson’s run on this book has been a shaky sort of thing anyway, always seeming within inches of running completely off the rails, but now we don’t even get a real conclusion to the ‘Rise of Eclipso.’  We don’t know why Jesse is suddenly speed-forced again, we don’t find out about Supergirl’s sudden return, we don’t even know whether the Shade (essentially lobotomized by Starman’s light-bursts) is dead or alive.  But, the editorial team wants to make it clear that Donna Troy is not and was never intended to be in the JLI, and whomever that girl was, it wasn’t Donna.  All in all, this book is completely inessential to anyone but the most hardcore JLA completist, delivering only fragments of story and ending with a final ‘thud’ that’s hard to swallow.  Justice League of America #59 can be a skip month for those saving up for September, earning only 1 out of 5 stars overall…

Faithful Spoilerite Question Of The Day:  Some have theorized that the removal of the mysterious dark-haired girl from the upcoming JLI debut cover proves that the DC revamp is already a failure.  Can anybody explain to me how that particular bit of tortured logic actually works?
DC James Robinson Justice League of America Review
Share. Facebook Twitter Pinterest LinkedIn Tumblr Email
Previous ArticleMOVIE: Jurassic Park 4 in the works
Next Article TRAILER: The Flaming C … coming soon (told ya)