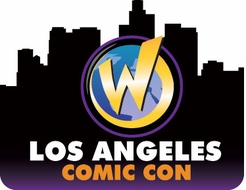 “We are excited to be back in Los Angeles, bringing so many superstar comics artists and celebrities,” said Gareb Shamus, Wizard World CEO. “We’re particularly excited about the wide collection of voice actors at Los Angeles Comic Con who have played some of the most memorable characters in the biggest blockbuster animated movies and popular television shows in history.”

Children and adult attendees are encouraged to come dressed as their favorite villain, superhero or pop culture personality for the chance to win special prizes in costume contests. Event-goers may also try their hand interactive product exhibits and shop for collectible comics, movie and television memorabilia, toys and games at a wide variety of dealer booths.

Los Angeles Comic Con is the eighth stop on Wizard World’s 2011 North American tour. Hours are Saturday, September 24, 10 a.m. – 7 p.m.; and Sunday, September 25, 11 a.m. – 6 p.m. Tickets are available in advance online at http://www.wizardworld.com/losangeles.html at a savings over tickets purchased at the door. Advance adult single-day tickets are priced at $25 ($35 on site); two-day all-session tickets are $40 ($50 on site), and tickets are free for children age 10 and under when accompanied by a paid adult (limit two children per adult). VIP packages with special entry and exclusive items are also available on a limited basis.