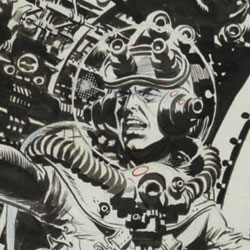 Kicking off the 2011 San Diego Comic-Con with a bang, IDW Publishing today announced the latest expansion to the company’s revered art book series with WALLY WOOD’S EC STORIES: ARTIST’S EDTION. The third in the Artist’s Edition series, focuses on one of the all-time greatest comic book artists, and at the absolute peak of his creative powers: Wally Wood. What Bill Gaines achieved with EC Comics was quite likely, pound for pound, the finest comics line ever produced, and Wally Wood was one of their mainstays, who set an incredibly high artistic standard.

“It’s wonderful to see such an amazing tribute to Wally Wood. IDW has done a top notch job,” said Cathy Gaines-Mifsud. “My Dad would be thrilled, as would Wally.”

An oversized, hardcover collection, WALLY WOOD’S EC STORIES: ARTIST’S EDITION will present Wood’s art the same size as it was originally drawn, and in a book measuring an amazing fifteen inches by twenty-two inches. As with all of IDW’s Artist’s Editions, the art presented will be scanned from the original pages to ensure the highest possible quality reproduction. While appearing to be in black and white, each page was scanned in color to mimic as closely as possible the experience of viewing the actual original art—for instance, white-out corrections and blue pencil notations.

“I love EC Comics,” said Artist’s Editions Editor Scott Dunbier, “and Wally Wood is one of my all-time favorite artists—when he’s at his best, no one can touch him.”

WALLY WOOD’S EC STORIES: ARTIST’S EDTION is the third of IDW’s Artist’s Edition series, following DAVE STEVEN’S THE ROCKETEER and WALTER SIMONSON’S THE MIGHTY THOR, which is launching at the convention. Two more volumes will be announced throughout San Diego Comic-con.