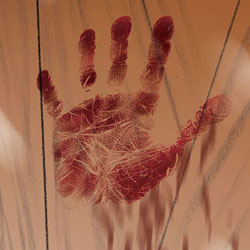 Action Lab Entertainment sent Major Spoilers a sneak peek of Snowed In that arrives in stores in October 2011.

A relaxing cabin vacation for four close friends takes a turn for the worse during a severe blizzard. A frantic stranger arrives to warn them that “it” is coming for them.

“It” wants them dead.

And how far will these four individuals go to protect themselves?

SNOWED IN is a self-contained, 40 page one-shot written by Shawn Gabborin (Fracture, Heavy Metal) with beautifully rendered and atmospheric artwork by Rick Lundeen.

SNOWED IN is available for pre-order in August (Order Code AUG110749).