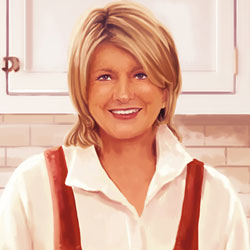 Bluewater Productions is pleased to present a unique venture in the history of comic books, a biography featuring Martha Stewart. “Female Force: Martha Stewart” will be released on Wednesday, July 20th.

Martha Stewart’s life has had a major impact on our culture. This comic will focus on her beginnings and the events that led to her eventually building a media empire all by herself, on par with powerful legends like Oprah Winfrey and how she was determined to become a household name and exceeded beyond her wildest dreams.

This 32-page comic book, written by CW Cooke and drawn by Kent Hurlburt, will be chronicling this saga, “Female Force: Martha Stewart” will explore all sides of this controversial woman, from her positive contribution to her fans’ lives and society at large to the detractors who argue against her attempt to use her influence and power for selfish, unethical ends, to the point of eventually being convicted of insider trading. Through it all, she has remained true to herself, her ambition and her vision through both the highest highs and lowest lows. Through it all, interest is still strong and steadfast for one of the most powerful women in the history of entertainment. The “Female Force” comic series offers a broad examination of strong and influential women who have shaped modern history and culture. In past issues, the monthly series has featured, Hillary Clinton, Oprah Winfrey, Princess Diana, Ellen Degeneres and others.

Join Bluewater Productions as we examine the enigma of Martha Stewart and how she has simultaneously and successfully projected an image of sweetness and light, while at the same time allegedly betraying some of her closest friends on her way to the top.

The biography comic book series which has been featured on CNN, The Today Show, Fox News and in Vogue, Vanity Fair as well as 1000,s of other places.

For more information on Bluewater Productions, go to
www.bluewaterprod.com or check them out in your local comic book shop and Amazon.com. To order it on Amazon click here: http://amzn.to/jIMiZG