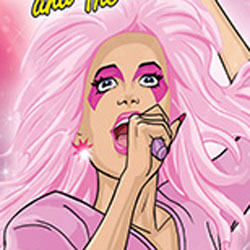 DVD: JEM and The Holograms the complete series collection I know this is something many of you have been dying to get your hands on – the complete JEM and The Holograms DVD series.  All 65 original episodes and a crap ton of bonus content are included in this 11 disc box set.

The series “JEM and The Holograms” ran from 1985-’88 in first-run syndication and still boasts a loyal and vocal fan base. It is frequently credited with influencing fashion in the late 1980s and beyond, and launching the careers of female pop-rock stars and music groups.  The series follows Jerrica Benton, whose discovery of Synergy, a powerful computer companion, allows her to transform from co-owner of Starlight Music into rock star Jem.  Teaming with her sister and best friends who form The Holograms, Jem sets out to make their musical dreams come true, even as she battles against the ruthless Eric Raymond and his musical protégés.

And if you need more convincing that this should wind up in your DVD collection, take the jump for the opening theme song.

JEM and The Holograms arrives in October 2011.