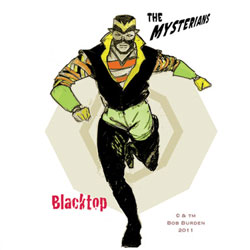 SDCC’11: The return of Bob Burden, Mysterymen, and Marble Comics

Just in time for San Diego Comic-Con, Bob Burden is back and bringing his wild side to America’s finest city! Back with Dark Horse after ten too many years, He’s even brought his own publishing house, Marble Comics!

The new Mysterymen trade, will collect the first four issues of the classic series that spawned the movie, in a signed and numbered limited edition of 200 just for San Diego. As a special added attraction to this convention preview edition only, there will be a first peek at a new line of superheroes from Bob, The MYSTERIANS. Bob Burden will be doing a number of signings over the weekend, and the book will be on sale at the Dark Horse retail booth #2615 for $19.99!

Oh, and hey, the back cover features the first appearance of FLIP FLAP FLOP, a pre-superhero Kirby-esque monster from JOURNEY INTO ASTONISH out of Bob’s now MARBLE COMICS GROUP line. On a bleak, cold, overcast winter Sunday morning, a hung-over detachment of Mysterymen scour a Brooklyn ship scrap yard for a monster of unknown origin. Auteur Bob Burden’s most riveting new era of stories are drawn by an international host of artists. This issue features the Strangler, Spleen, Hummer, and Masked Marauder.

One of the wildest origin stories ever! While yuppie Lance Fortnight is converting a downtown loft into his new dream home, he discovers seven mysterious discs in a wall. These strange “living” discs will save his life, wreck his life, and change him forever! The story of Lance’s transition from carefree youth to grim avenger is complete in this issue, featuring the Amazing Disc Man.

In his first solo appearance, Screwball, the happy hero, and his pet shoelace go for a walk around town. Screwball writes “wash me” on the backs of dirty cars, eats a dandelion sandwich, buys some pants, and battles some renegade gondoliers with his wits and his bubble gun! A story that’s more fun than dogs driving cars.

Lust! Murder! Insanity! Drugs! Betrayal! Gangs! Torture! Attorneys! Violence! It’s ALL here in All Villain Comics! Read about the lost lives of the wicked and the greedy! Go inside the twisted minds of the demented and the morally bankrupt! See CRIME at its most craven and vicious! Go wild with the Yellow Rider, the Tennessee Thunderbird, and SexFly, as they burn it up across the LA skyline!