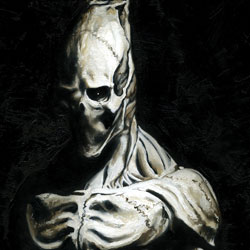 “I had the wonderful opportunity to work with menton3 on IDW’s Silent Hill: Past Life miniseries,” said IDW senior staff writer and editor, Tom Waltz. “His work on that book was phenomenal and I knew all along he was destined to be a mega-star in this industry. MONOCYTE proves I was right!”

MONOCYTE #1, available in October, tells the tale of two warring immortal races who rule a scarred world absent of duration. Death sits impotent, quietly planning his restoration. He summons Monocyte, a forgotten immortal necromancer who long ago chose sleep in his failed quest to die. With a fatal pact sealed, Monoctye strikes out as Death’s vicious proxy. MONOCYTE is an action-adventure in a hyperrealistic fantasy setting with occult undertones, filled with visually dazzling characters, environments, and dynamic fight scenes all imbued with magical, occult, political, philosophical, social, and technological themes.

Readers can get a taste of the MONOCYTE horror through a free digital preview, available from IDW this summer. In addition to the two issue #1 covers by menton3, readers are encouraged to ask their local retailer about the variant Ashley Wood cover. Future issues of MONOCYTE will feature variant covers by such luminaries as Bill Sienkiewicz.